This level can be a nuisance without the proper plants. Because of the elements of this level, this can be a hard combination to defeat the zombies with. The Pianist Zombie stands out the most, especially with the player having to lose no more than one plant. The player needs a long ranged plant to deal with this, as well as it being powerful. However, there are also Chicken Wrangler Zombie, so plants like Lightning Reed or Snapdragon should be used. The flowers also provide another problem, in addition to the position they are in, right in front of some minecarts. Using plants like Melon-pult and Coconut Cannon on minecarts are ideal for this level, as they can easily take down some of the more powerful zombies in this level.

With Lightning Reed under the same situation:

At the end of the level, the lawn should look like this:

This set-up is an easy set-up that will make the level tireless and easy, and only requires the player to beat Pirate Seas - Day 11 to be able to use this strategy.

Start by placing Sunflowers in the first column. Proceed to do so in the 3rd and 4th columns where there are empty tiles. When the first zombie appears, place a Wall-nut down on the 6th column. Now keep placing down Sunflowers until you can get a Snapdragon. Place it on the 5th column. When the second zombie comes around, place another Wall-nut, and a Snapdragon on the 5th column. Now start building up a row of Snapdragons and Wall-nuts. When a Buckethead Cowboy appears, get some sun for Coconut Cannon. Place the first Coconut Cannon on the full row minecart. Then, proceed to put 2 more Coconut Cannons on the other 2 minecarts. Now, the only thing left to do is use Coconut Cannons strategically, as they are vital to defeating the Pianist Zombie. Chicken Wrangler Zombie will be dealt with Snapdragon. If you haven't lost a plant yet and things are getting rough, you can use a Cherry Bomb, though isn't always necessary. Build up Plant Food for the last few waves, and use them on Snapdragon. Using Plant Food on Snapdragon at this point will obliterate every zombie in a 3x3 radius in front of it, perfect for completing last wave. If Wall-nuts get damaged, use Wall-nut First Aid. 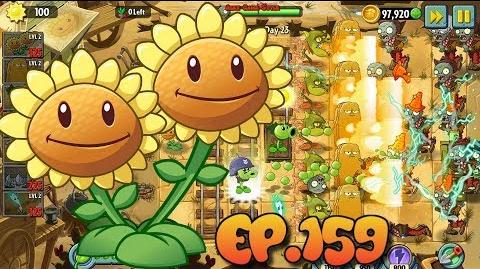 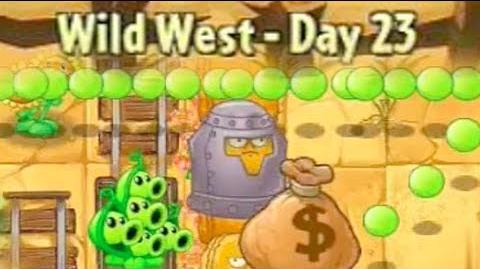 Retrieved from "https://plantsvszombies.fandom.com/wiki/Wild_West_-_Day_23?oldid=2357490"
Community content is available under CC-BY-SA unless otherwise noted.