Same as before
Wild West - Day 13 is the 13th level of Wild West in Plants vs. Zombies 2. It is a regular level that introduces a new zombie called the Zombie Bull. After completing this level, the player receives a money bag.

The new Zombie Bull can cause some havoc if the player doesn't set up properly. The Zombie Bull will launch a Zombie Bull Rider 3 tiles ahead of it when it comes into contact with a plant. This zombie also has the health of a Buckethead, making it more difficult to deal with. Using cheap plants can help with this because they will activate the Zombie Bull's ability and launch the Zombie Bull Rider not too far. If the player has Cherry Bomb, this plant is an excellent choice for dealing with this new zombie, as it will instantly kill it without launching the zombie. Using the newly acquired Melon-pult is great too, as it can dish out some heavy damage to it. The minecarts present in this level makes using Melon-pult an advantage. Lastly, if the player has it, E.M.Peach can stun it because it is, surprisingly, a robot. 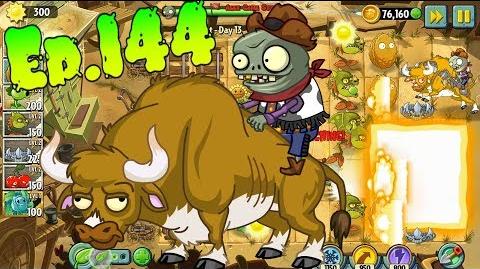 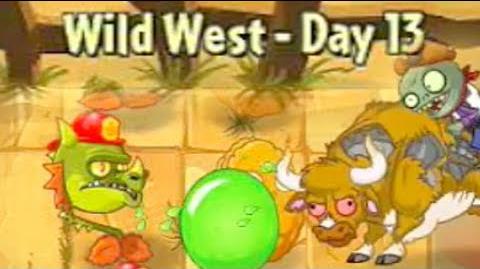 Retrieved from "https://plantsvszombies.fandom.com/wiki/Wild_West_-_Day_13?oldid=2356996"
Community content is available under CC-BY-SA unless otherwise noted.