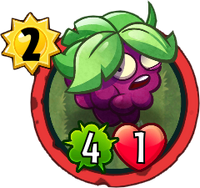 When played: This moves to a random lane.
What one word best describes Wild Berry? "Unpredictable."
Wild Berry is a premium rare plant card in Plants vs. Zombies Heroes and a member of the

. It does not have any traits, and its ability moves it onto another random lane when it is played. Its closest zombie counterpart is Cuckoo Zombie.

It is based on a raspberry, the edible fruit of a multitude of plant species in the genus Rubus of the rose family, most of which are in the subgenus idaeobatus; the name also applies to these plants themselves.

Its name is based on "wild berry," a berry found in the wild, and the flavor wild berry, which tastes like various types of berries. It may also be a combination of "wild," meaning untamed and unpredictable like its ability to move to random lanes, and "berry," the real-life plant it is based on.

Its description makes a reference to its ability.

Statwise, Wild Berry is a powerful glass cannon, being able to destroy many cheap zombies. If you want it to survive longer, you can choose to play stat-boosting cards, or protect it with a Team-Up plant after its ability has activated.

But despite having very good stats for a 2-sun glass cannon, it is very unreliable. There is no guarantee in where Wild Berry actually ends up, unless every other lane is filled with plants. This may enable you to land 4 damage directly to your opponent or protect a valuable Team-Up plant like Sunflower, but it can also prevent Wild Berry from destroying or blocking a key zombie, or move in front of a defensive Team-Up plant like Wall-Nut, which defeats their purpose.

Still, if you think you can handle its unpredictability, and want to use it in your deck, here is a tip. Wild Berry does not move to aquatic lanes due to it lacking the Amphibious trait, nor does it end up back on the same lane it was played on. This means that you can take advantage of its ability by playing Wild Berry on a lane that you do not want to end up having it on, as it will always move somewhere else when played. Filling all but one lane with plants helps too, as Wild Berry's ability does not activate when there is only one empty lane.

If Wild Berry moves to an undesired lane, you can either move Wild Berry, or move the zombie fronting it. Examples are Banana Peel, Bubble Up, Gardening Gloves, and Sweet Potato. However, this strategy is only limited to Captain Combustible and Spudow, and must be done after turn 3 or 4, because Wild Berry cannot survive combat against a zombie.

The best turn to play Wild Berry is on the 2nd or 3rd turn. On the 2nd turn, there may be very likely at least 1 zombie on the field (or 0 if your opponent is saving cards, which in this case, you should watch out for a Bungee Plumber). Wild Berry might land on an empty lane, giving you a fresh 4 damage to your opponent. If it is played on the 3rd turn, play a cheap Team-Up plant such as Wall-Nut after it has moved. If used correctly, Wild Berry can be a good plant despite its randomness.

Since Wild Berry is a berry plant, it can be used in tandem with Sergeant Strongberry as the latter does 2 extra damage to any zombie Wild Berry hurts. However, there is a good chance that Wild Berry moves to a lane with a weak zombie on it, usually making the extra damage useless. It can also be combined with High-Voltage Currant to boost it.

Even though Wild Berry has high strength, it is not recommended to destroy it with Rocket Science unless it guarantees your victory. Without a health boost, any cheap zombie or trick is enough to remove it. (Tricks are more recommended as you can play them immediately after seeing which lane Wild Berry ends up on, and its moving ability will not matter as most zombie tricks allow you to select a target.) You can remove this card with ease with cards such as Acid Rain, Conga Zombie, Pied Piper, Foot Soldier, and Bungee Plumber. If it ends up on a ground lane, Total Eclipse can destroy it instantly if unboosted as well.

Squirrel Herder can take it out, although you need to worry about Spudow's Grave Buster and Blockbuster, or Nightcap's Grave Mistake.