to play, and its ability gives a random zombie the Bounce effect. Its zombie counterpart is Dolphinado.

It is based on the weather phenomenon with the same name and appearance.

Its description is a reference to the quote from the novel and movie, The Wizard of Oz, "There's no place like home."

Compared to Spring Bean, Whirlwind trades cost for power, costing 2 less sun but being unable to select which zombie to Bounce and having no meaningful synergy. Due to its ability being random, it is better to eliminate zombies yourself so that only threats remain on the field, increasing the chance of Whirlwind Bouncing the zombie you want. It is not recommended to play this on the first turn, as your opponent has a chance to replay the Bounced zombie, unless you don't have a 1-sun cost plant for threats such as Mini-Ninja and Tennis Champ.

If your opponent has just spent all their brains on a high-cost zombie, and there aren't any other zombies in play, playing Whirlwind can be good as you know which zombie is going to get bounced so its "random" aspect doesn't even matter.

Since Whirlwind acts similarly to Spring Bean, any strategies with Spring Bean apply to Whirlwind as well. However, you are a bit safer against Whirlwind as your opponent cannot select which zombie to Bounce. You can also use

Untrickable zombies such as Parasol Zombie and Jurassic Fossilhead to negate it. 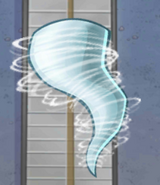 The player having the choice between Whirlwind and Summoning as the prize for completing a level before update 1.2.11