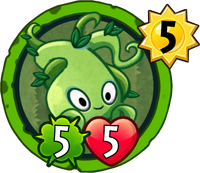 When played: Move a Zombie.
"Get along, little Zombie."
Whipvine is a premium rare plant card in Plants vs. Zombies Heroes and a member of the

. It does not have any traits, and its ability moves a selected zombie onto a selected lane when it is played. Its closest zombie counterparts are Sumo Wrestler and Rodeo Gargantuar.

It is based on the plant scientifically known as the Flagellaria indica, or more commonly referred to as the whip vine, a type of climbing plant found in tropical areas.

Its description references the song "Git Along Little Dogies" by Roy Dogers.

"Get along, little Zombie."

Whipvine is quite a decent plant given its raw stats, and thanks to its ability, it can also get you out of a tricky situation, or maybe give you an opportunity to do more damage to your opponent. For example, it can be used to move a zombie onto a lane with a tough plant like Wall-Nut for stalling, move it away to make way for a hard-hitting or Anti-Hero plant, and even force it to attack a plant to your tactical advantage (e.g. when Briar Rose is on the field and you want a zombie to hurt a flower to get rid of it). Grass Knuckles can Conjure and boost it with Starch-Lord. As Green Shadow, you can also Bounce this plant with Rescue Radish to replay its ability.

Being a pretty strong plant, Whipvine is difficult to destroy, especially since it can move one of your zombies around.

If you wish to get rid of Whipvine, you can play tricks such as Rocket Science and Locust Swarm to destroy it quickly. Cut Down to Size is an especially cheap option if you are playing as Super Brainz or Rustbolt. There are also several zombies strong enough to destroy it in one hit like Copter Commando, although most will be destroyed as well in the process if unboosted.