Whack a Zombie is a mini-game based on Adventure Mode Level 2-5 in Plants vs. Zombies, a bonus level. It is also present in Plants vs. Zombies: Journey to the West, Plants vs. Zombies: Great Wall Edition and the Brain Buster of Steam Ages. This is a harder version of the original level. The player uses a mallet to whack zombies that spawn from graves from the right side of the lawn. As the level progresses, the zombie's speed quickens. Different zombies will take a different amount of hits before they die. The player may also occasionally earn sun from zombies to use helpful plants.

It is a reference to the game Whack a Mole. 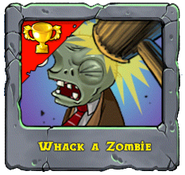 PC icon when the mini-game is complete 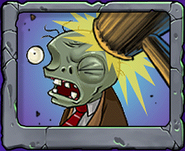 You use a mallet in this level to whack zombies to kill them. Killed zombies, as stated earlier, occasionally drop 75 sun with which you can plant Ice-shrooms (Cherry Bombs in the Adventure Mode and iOS version), Potato Mines, and Grave Busters. As in Wall-nut Bowling, Zombies take one hit, Conehead Zombies two, and Buckethead Zombies three.

Initially, Grave Busters should be used to destroy the graves that are closest to the player's house or lanes with multiple graves, working backwards towards the edge of the lawn. As the level progresses, it is a good idea to systematically use Grave Busters so that eventually the only graves remaining are in one horizontal row (or at most two adjacent ones); this will group all the zombies together and thus make it easier to whack them. Also, since destroying too many graves causes multiple new ones to spawn at a time, it is ideal to leave exactly four graves, and then only destroy new ones as soon as they spawn. The destroyed graves also gives you a coin, making it a better choice.

Ice-shrooms or Cherry Bombs should be used wisely, as their recharge time stops them from being used more than twice. Potato Mines can also be planted in front of the Lawn Mowers to stop single zombies. Since the zombies walk faster and faster as the level progresses, you might need an Ice-shroom right before the final wave.

When the level is complete, the player can keep planting Grave Busters on the remaining graves until they run out of sun. If they are lucky they can quickly remove all the graves.

On the PC or GOTY version, clicking very fast on graves can whack the zombies almost instantly, meaning you can go from grave to grave whacking most zombies without having to spend sun.

On the iPad version, the player should turn off the multitasking gestures to use as many fingers as possible without interrupting the game by mistake. 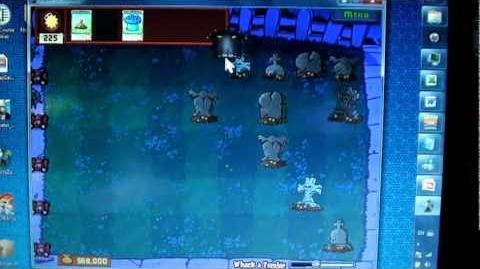 Plants Vs. Zombies Minigame 15
Add a photo to this gallery

Retrieved from "https://plantsvszombies.fandom.com/wiki/Whack_a_Zombie?oldid=2247255"
Community content is available under CC-BY-SA unless otherwise noted.