Rare
Arc welding himself to one of Zomboss' mega blimps was one of the lower points of his employment at Zomboss Inc. He's now been demoted to the front lines and placed on probation.

Arc welding himself to one of Zomboss' mega blimps was one of the lower points of his employment at Zomboss Inc. He's now been demoted to the front lines and placed on probation.

The Welding Blaster is the primary weapon of the Welder. The facts below apply to a fully upgraded weapon.

With a heat resistant reloader the reload times improve.

Heating storage improved resulting in an increase in ammo capacity.

Who wants some extra Hot Fireballs? They look great, they're hot, and they increase damage.

This character is similar to the Fire Pea, due to having splash damage and a fire effect. What sets the Welder apart is the abilities. The Sonic Grenade is amazing to use with this character, as it can set groups of plants up to take a lot of damage, as well as suffer form the fire effects. Use to Jackhammer to rush to ranges where you are comfortable shooting from. If you can keep on the pressure, the Welder can be one of the most dangerous Engineer variants in the game due to his sheer damage output.

In order to unlock this variant, the player must reach rank 10 with the Engineer class. They need to do this by completing challenges with the Engineer and any of its variants. The player earns a character piece for each rank they level up starting at level 6 all the way to level 10.

The Welder in beta gameplay of Team Vanquish 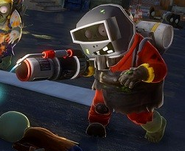 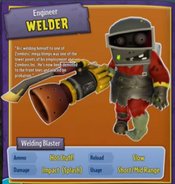 One of Welder's character stickers 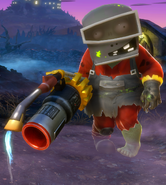 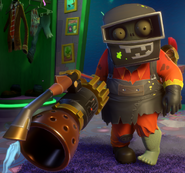 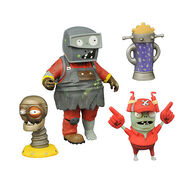