Weekly Event is a game mechanic introduced on version 1.10.14 of Plants vs. Zombies Heroes. It allows the player to obtain event-exclusive cards with a currency called tickets. Each week, 1 of the 52 Weekly Event cards will be available to be acquired; the cycle is currently repeating itself for the second year.

Tickets are a special currency that are used to obtain that week's event card. Starting 2/28/17, every 1200 tickets awards a player an event card, up to 4 event cards per week. Winning a single player mission battle awards a player 10 tickets, winning a multiplayer match awards 15 tickets; boosts multiply your ticket earnings by 5x or 10x.

Tickets DO NOT carry-over week to week, your ticket count resets at the start of each weekly event.

After using a boost, the player will need to wait for four hours before the boost refills to use it again, or they can pay 20 gems to refill it instantly (a bad value).

The boost may target classes led by the hero the player does not have, for example Mega-Grow and Solar when they do not own Chompzilla yet. In this case, a Hero Pack will be available at the For You section in the store until the event ends, which contains the Hero with two said classes alongside five premium cards.

Boosts do not increase Daily Challenge winnings, otherwise a player would earn too many tickets.

Weekly Event cards cost 1,000 energy to craft, equivalent to Super-Rares value-wise. While grinding tickets for new Event cards is a good value for the effort, recycling Event cards for 250 energy is a slow grind. For this reason, the prudent advice is to refrain from crafting Event cards unless necessary, the energy can be better spent elsewhere.

The table below shows every Event card that could be obtained.

Below is a list of all Event cards that are currently in Early Access and were only available with real currency purchases in the past or can be crafted using sparks. Some of these might not even have their own Weekly Events in the near future, thus only obtainable through tribal packs or crafting.

The best way to get with tickets is to grind Multiplayer games with the 10x boost. The ticket boost fills up naturally once every four hours. A player can acquire a playset of Weekly Event cards (4800 tickets) if they complete all Daily Challenges within a week (1200 tickets) and win 24 multiplayers games with 10x boost (3600 tickets). If possible, do not waste a boost on a 5x multiplier or on single player games.

With the doctor recommended 8 hours of sleep, a player can reasonably expect to win four multiplayers games with the 10x boost within a day. Theoretically a player can complete 5 multiplayer matches within a ~16-hour window but that an extreme expectation.

When grinding multiplayer games, the key is to complete games as fast as possible; the ticket boost doesn’t reset it’s 4-hour clock until after you win a game with an active boost. Play decks designed to win a game as soon as possible e.g. aggro instead of control decks. It's suggested instant conceding against high level opponents or when a control deck stabilizes, move on before you waste 15 minutes playing a game you’ll end up losing anyways.

If a player doesn't have all the heroes unlocked, a player should consider saving at least 750 gems before the start of the weekly event so they can buy one of the heroes with the 10x boost if they do not own it yet. Players can buy a copy of the current event card for up to 500 gems but value-wise this method is not recommended. Alternatively, 20 gems can be spent to instantly fill the boost meter if the player needs more boosts in a short time. If this is used, it is strongly recommended to be performed right after another boost was used, since otherwise the time spent on the natural filling of the boost will be wasted.

Alternatively the player might adjust the internal clock of their device to instantly refill their ticket boost in order to skip the 4 hours of waiting time. However, this trick is highly discouraged since it can corrupt the user's save data if connected to EA or Facebook, so players should perform this at their own risk. They should also avoid using this method to complete Daily Challenges as it will glitch their game, making the challenges "Unavailable" when the time is reverted and thus be unable to gain the tickets from the Daily Challenge. 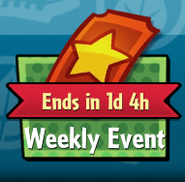 Weekly Event on the main menu 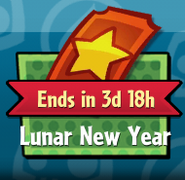 An advertisement for the Weekly Event 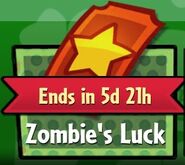 Retrieved from "https://plantsvszombies.fandom.com/wiki/Weekly_Event?oldid=2249774"
Community content is available under CC-BY-SA unless otherwise noted.