I need my TIME MACHINE!
Weapon Stand is a conjectural name for this article.
If you know the official name or have a better name or translation for it, please contact a wiki administrator to change it.

Weapon Stand is an environment modifier in Kongfu World. It is first encountered in Kongfu World - Day 1. The Weapon Stand occupies one tile of the player's lawn. Some of them spawn at the start of the level, as well as at some point during the level. It holds flags, torches, bombs, hammers, and helmets. If a Kongfu or Monk Zombie manages to step into it, they will put the item on and transform to another zombie. Similarly to tombstones, they will block projectiles that are fired straight ahead and cannot be planted on. Plants that occupy a certain tile on a place where the Weapon Stand appears will be tossed away from the lawn.

Here are all the transformations possible when a zombie reaches a Weapon Stand: 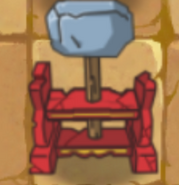 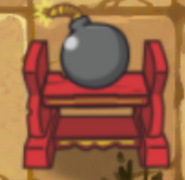 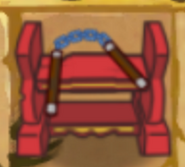 Sprites
Add a photo to this gallery

Retrieved from "https://plantsvszombies.fandom.com/wiki/Weapon_Stand?oldid=2188217"
Community content is available under CC-BY-SA unless otherwise noted.