Not to be confused with Wax Gourd.

Can activate Floor-de-Lis tiles when he jumps.

Wax Guard has been in that crucial position for an awfully long time. Countless zombies are eager to try and move him one tile, to advance down the lane, Ah~! The sound of their voices get quieter as they approach the horizon.

Wax Guard (冬瓜守卫; pinyin: dōngguā shǒuwèi) is a plant in the Chinese version of Plants vs. Zombies 2. He is a defensive plant who, when planted, briefly stuns zombies on the tile in front of him and activates the Floor-de-Lis tile he is planted on.

Wax Guard is an Uncommon plant unlocked in Renaissance Age. He is a defensive plant that, when planted, jumps in-place to bounce zombies in the air, briefly stunning them.

His jumping can also activate Floor-de-Lis tiles when he is planted on them, allowing the player to move all Vitruvian Wheels to their advantage.

He is based on the wax gourd (Benincasa hispida), a fruit native to South and Southeast Asia named for it's waxy coating that is obtained as the fruit matures and ripens.

He is additionally based on the plant of a similar name from the now defunct Chinese exclusive tower defense game Plants vs. Zombies Online.

His name is a pun on "Wax gourd", the fruit he is based on, and "guard", referencing his defensive abilities.

Wax Guard must be used wisely if it comes to Renaissance Age. You must use him accordingly when being planted on Floor-de-Lis. This gimmick can activate the Vitruvian Wheel which can destroy zombies instantly, but also can destroy your defenses if not used properly. Shoveling him up can deactivate the Vitruvian Wheel, which will prevent them from destroying your defenses.

But in other worlds, he's able to push any zombies back temporarily. In Neon Mixtape Tour, Punk Zombie and MC Zom-B is a good zombie for Wax Guard to knock back by him, which giving the player's more time to plant more defenses. Leveling up him is even better to push back more zombies. Also in Lost City, he's able to knock back Excavator Zombies, Lost Guide Zombies, and Lost Doctor Zombies, preventing them from doing their actions.

He's also a good plant to choose for Pirate Seas. Try to plant him onto lanes without planks. You can do this only when there are Swashbuckler Zombies ambushing through the lawn, which can knock them off to the water. He can also be used to counter the Imp Pirate Zombies fired by Imp Cannons, although you only can do this when the Imp Cannon launches an Imp Pirate Zombie that lands onto the deck. When it lands, try to plant Wax Guard quickly to knock it off from the deck. 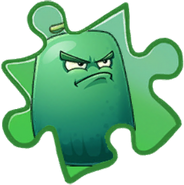 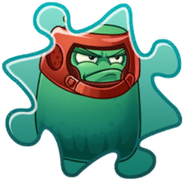 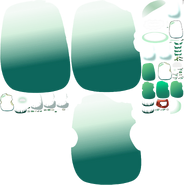 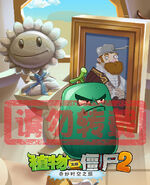