Plants vs. Zombies Wiki
Register
Don't have an account?
Sign In
Advertisement
in: China exclusive, Archived, Plants,
and 11 more
English

Not to be confused with Wax Guard.

Wax Gourds roll along paths and kill any zombies on them.

Beating Qin Shi Huang Mausoleum - Level 7-1
Can kill all zombies when rolling along paths.
Wax Gourd (冬瓜; pinyin: dōngguā) was a plant in the now defunct Chinese exclusive tower defense game Plants vs. Zombies Online. It was an instant use plant that could roll on the paths to defeat zombies in the Qin Shi Huang Mausoleum.

It was based on the wax gourd (Benincasa hispida), a fruit native to South and Southeast Asia named for its waxy coating that is obtained as the fruit matures and ripens.

Its Chinese name translates directly to "Winter Melon", an alternate name for the Wax Gourd.

Wax Gourd was an instant use, Qin Shi Huang Mausoleum unlockable plant who could only be planted on the pathways in the said world.

It rolled along the dug path, and killed all the zombies in its way, similarly to Jalapeno and the Wall-nut Bowling exclusive Giant Wall-nut from the original game.

When disappearing, it will explode, and will deal damage to the whole row it was planted on.

This is quite literally a weaker and pathway version of Jalapeno. Do not use it by itself, as it is just an instant use plant very similar to the latter. Use it for assisting strong plants like Coconut Cannon.

This is particularly decent early game, when you need to kill strong zombies, but have no access to a Potato Mine or the like. This plant should be used aggressively, either on the first lane to make full use of its range, or on the 3rd, 4th, or 5th lane, if you need to quickly dispatch zombies, or simply don't want to leave the first row and lane alone for the sole use of this.

Note that it is also an instant-kill, so using it to beat tough zombies on pathways, such as Hawker Carts or Archer Zombies is highly advised.

Wax Gourd in the trailer 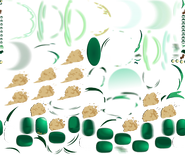