Plants vs. Zombies Wiki
Register
Don't have an account?
Sign In
Advertisement
in: Abilities, Z-Mech abilities, Imp abilities (all),
and 3 more

Water Cyclone is the first exclusive ability for the S.H.R.IMP's mech in Plants vs. Zombies: Garden Warfare 2. When used, the S.H.R.IMP Mech will shoot out a cyclone of water in front of it to knock back and temporarily deal 5 damage to nearby plants.

This ability is basically valueless. Its only true use is to use it to push plants back to get away with Shrimp Jump or to uproot rooted plants, though this will only work for rooted plants close to you and the Explosive Escape + Gravity Grenade tactic works much better. This ability should be mostly ignored since it also makes you an easier target while you're shooting the cyclone and although this does damage, it's very little so don't expect to get a vanquish with this. On maps like Boney Island or others that have hazards, this knocks plants back, so you could knock them in the hazard. Don't count on that, though. It was probably originally meant to help out the more long-ranged mech in close combat, but the reasonable auto-targeting means its beam does pretty well up close, except against strong units like the Iron Citron or Armor Chomper.

You shouldn't have to worry about this too much unless you have low health. In fact, you can use this to your advantage because the mech stops moving while shooting out the cyclone so you can lower his health down without it shooting back with the Shrimpy Beam. It is also very easy to dodge it before it fires the cyclone since he makes a mechanical/marine sound. 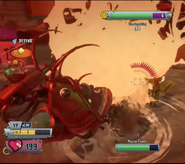