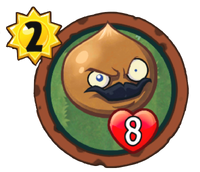 None
"300 laps a day, every day. That's how I do it."
Water Chestnut is a premium uncommon plant card in Plants vs. Zombies Heroes and a member of the

. It has the Amphibious and Team-Up traits and does not have any abilities.

In the boss battle for the mission Disco Inferno!, the plant hero starts with a Water Chestnut on the third lane.

It is based on the water chestnut, an edible corm produced by the grass-like sedge of the family Cyperaceae. However, its design seems to be based more on a sweet chestnut (Castanea sativa), an edible nut produced from trees in the beech family Fagaceae.

Water Chestnut functions as a Wall-Nut with more health and the Amphibious trait, but also with a slightly higher sun cost, so use this plant in the same manner as you do with Wall-Nut. This can also be a replacement for Wall-Nut.

Its main reason to use it compared to a regular Wall-Nut is the Amphibious trait; using this, you can protect your plants from powerful Amphibious zombies up to Deep Sea Gargantuar. Playing some decently powerful Amphibious plants behind it such as Cattail can make for a good strategy.

In addition, since it is a nut, it benefits from Smackadamia's boost of +2

, and since it has no strength, it benefits from Spineapple's boost of +2

too. In addition, Mirror-Nut can benefit from it, since it does classify as a nut. If played with Starch-Lord on the field, he will also gain a small boost.

As Grass Knuckles, you can boost it with Fertilize to prevent Rolling Stone, Rocket Science, and Weed Spray from destroying it. However, there is still Knockout to worry about.

With its high health, Pecanolith can combo with this really well, turning it into a 8

plant, possibly on a water lane, for just 2 sun.

Destroy this plant in the same manner as you do with a Wall-Nut, as it is only a slightly stronger Wall-Nut that can be planted in the aquatic lane. Rolling Stone and Weed Spray are able to destroy it easily because of its lack of strength. If those aren't an option, resort to Amphibious zombies or damaging tricks. However, if this is all by itself, it's not really a threat and you don't have to do anything to it. If there's a strong plant behind it, try to destroy that plant instead. The only reason you'd want to destroy the Water Chestnut itself is if it gets a strength buff, either by Three-Nut or Spineapple, in which it is practical to destroy it due to its high health.