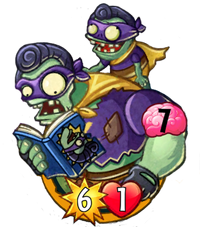 for each Health your Hero has.
He has Super Brainz stickers all over his binder.
Wannabe Hero is a premium legendary zombie card in Plants vs. Zombies Heroes and a member of the

Frenzy trait, and his ability adds the amount of health the zombie hero has onto his health when he is played.

His name is a combination of "wannabe" and "hero," referring to him resembling (due to visibly being a fan of) Super Brainz.

He has Super Brainz stickers all over his binder.

If Wannabe Hero is played when you have lots of health, he potentially becomes the toughest non-boosted zombie in terms of health. But if he is played in the exact opposite situation, he is not worth the 7 brains. Thus, keeping your health high is the most crucial thing to do if you are to use him well. While all heroes that can normally play Wannabe Hero have healing cards (every Hearty hero has access to Medic at the very least), these are better treated as insurance, and you should attempt to negate as many attacks as possible before you get to play him instead. Control decks and swarm decks are ideal, as they are able to easily neutralize/block plants so that they don't get to hit you. Flag Zombie, Gargologist, Planetary Gladiator, and shielding cards help too.

The Smash can easily use Wannabe Hero to his full potential, as he has access to Nurse Gargantuar, Nibble, and Heroic Health, which are three efficient healing cards. Wannabe Hero does not have any tribe synergy, however, as he already has the Frenzy trait. But his high stats are good enough to make a big difference. He can also boost him with Ancient Vimpire because of his Frenzy trait. And because of his Gargantuar tribe, he can pair him with King of the Grill and Supernova Gargantuar, with Smashing Gargantuar being the only exception because he already has the Frenzy trait.

Bullseye, allowing him to smash through plants that block his way and land 6 damage on his opponent without worrying about the Super-Block Meter charging up. He is also able to make more brains, allowing him to play Wannabe Hero even earlier.

You can also take advantage of his ability by playing him while Pecanolith is on the field. If Wannabe Hero gets enough health, he will deal massive damage and mow down plants easily or defeat your opponent due to his Frenzy trait.

However, be warned. Like all other big-stats zombies, he's vulnerable to big removal cards like Squash and Shamrocket. So make sure to either as Rustbolt to pair him up with Parasol Zombie or teleport him in the tricks phase, or as Neptuna hide him in Graveyard. Otherwise your opponent can easily remove him and play something threatening elsewhere.

This is a really difficult zombie to deal with, especially if he is played when your opponent has lots of health. The best way to counter Wannabe Hero is to deplete your opponent's health to the point where it just isn't worth playing him.

If Wannabe Hero is played and gets a lot of health, he is best dealt with instant-kill cards, such as Lawnmower, Squash, Shamrocket, and Winter Squash. As Rose or Citron, you can also opt to transform Wannabe Hero into something weaker using Transmogrify or Goatify, albeit limited. Or, you can Bounce Wannabe Hero and damage your opponent as much as possible, weakening Wannabe Hero when he is replayed. Unfortunately, Captain Combustible has access to none of the above, so depleting your opponent's health swiftly is the best course of action if you are playing as him.

Destroying Wannabe Hero via combat is not an easy task since Wannabe Hero hits hard and is extremely bulky, but it is the only option if you cannot instantly destroy or transform him. Using high offense or high defense would be the best tactic; high offense utilizes plants with high strength (whether they are glass cannons or well-rounded), such as Super-Phat Beets and Mushroom Ringleader. High defense, on the other hand, involves using tough plants like Soul Patch and Primal Wall-Nut to have them tank the damage and wear down Wannabe Hero at the same time. While a defensive setup is less effective at handling Wannabe Hero since he can destroy all unboosted plants in two attacks, it can be somewhat merged with an offensive setup. You can