For the zombie with a similar name, see Walrus Rider.

Becomes a slope for Ski Zombie.

Walrus Zombie has always been dissatisfied with his body weight. He gave himself a weight loss program: run 5 kilometres a day. But when he tried it, he noticed a serious problem: he had no legs, so how could he "run"? He thought about it for a long time, and still not solving the problem, so he decided to postpone the plan until he had solved the problem...

Walrus Zombie (海象僵尸; pinyin: hǎixiàng jiāngshī) is a zombie encountered in Frostbite Caves in the Chinese version of Plants vs. Zombies 2. Ski Zombie uses Walrus Zombie as a slope to jump past the player's plants. The Walrus Zombie also creates an Ice trail that speeds up the aforementioned zombies, similarly to Zombonis and Zombie Bobsled Teams, and prevents plants from being planted on them. It is an environment modifier.

This is a very dangerous zombie if it's let into your lawn far enough. It will move and crush all plants that are in its way, then will stop at a certain point. It will also create ice trails, so the player cannot plant behind it. After it stops, Ski Zombies will appear and jump over it. The Ski Zombies will reach the last column of the lawn if the Walrus Zombies reached it's maximum distance and will very likely make the player lose. Tornacorn can kill it in few hits, Magnifying Grass can also make quick work of this zombie. Sliders will make this zombie stop, but they do not stop Ski Zombies from breaching your defenses. Hypno-shroom or Caulipowers on a zombie that is ahead of it will kill the walrus easily as they don't attack. However, a hypnotised Walrus Zombie can demolish every zombie it encounters and due to its slow speed it can kill many zombies before either dying or walking off the lawn. A Jalapeno can also be used to kill the Walrus Zombie and melt the ice trail in some dangerous situations. Due to this Zombie actually having Stiff speed, the player can use slowing or stalling plants to reduce the speed of the Zombie.

Walrus Zombie with its ice trail

Walrus Zombie with its mouth opened 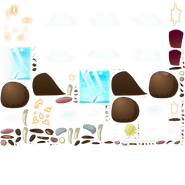 A shrunken Walrus Zombie
Add a photo to this gallery

Retrieved from "https://plantsvszombies.fandom.com/wiki/Walrus_Zombie?oldid=2368852"
Community content is available under CC-BY-SA unless otherwise noted.