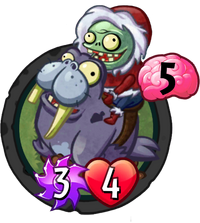 For the zombie with a similar name, see Walrus Zombie.

None
A walrus seemed the obvious choice. After all, horses don't go on land *and* water.
Walrus Rider is a premium rare zombie card in Plants vs. Zombies Heroes and a member of the

Anti-Hero 3 and Amphibious traits, and does not have any abilities. Its closest plant counterpart is Poison Oak.

It is based on a walrus, a large flippered marine mammal with a discontinuous distribution about the North Pole in the Arctic Ocean and subarctic seas of the Northern Hemisphere.

A walrus seemed the obvious choice. After all, horses don't go on land *and* water.

Walrus Rider can be considered to be a more expensive version of Stealthy Imp, trading 2 additional brains and the lack of the Gravestone trait for 1 more strength, 2 more health, and Amphibious. You will most likely find Walrus Rider's Amphibious trait to be a key point when choosing one over the other, as Walrus Rider's increased health is more or less negated by its lack of protection against tricks, and both of the cards have poor stats for their cost anyway. Using this against Solar Flare, Chompzilla, or Captain Combustible can lead to an easy win, due to their lack of Amphibious plants and its resistance of a Berry Blast, You just need to watch out of Squash though, which 2 out of the mentioned 3 heroes have. However, by having Parasol Zombie (as Super Brainz or Huge-Gigantacus), she would make him immune to tricks.

As a pet zombie, Walrus Rider can also find a place in Brain Freeze's pet deck, providing synergies with Cat Lady and Zookeeper. Additionally, Walrus Rider is classified as an Imp, which can synergize with Imp Commander and Toxic Waste Imp.

If you are facing against Walrus Rider on the aquatic lane, Sweet Potato or Whipvine can use their abilities to move Walrus Rider into another lane, removing him from the aquatic lane and blocking one attack. Banana Peel is also a better option. This is useful if you are Chompzilla or Captain Combustible since they lack Amphibious fighters. It is recommended to try and destroy this zombie quickly after, as

Additionally, using Squash, Whack-a-Zombie (only if Walrus Rider is facing a plant on its lane), or Sizzle can deal with Walrus Rider easily. You can also use Cherry Bomb if there are other zombies nearby.

Due to its Anti-Hero 3 trait, you can easily remove it with Shamrocket or Doom-Shroom, provided you are playing as a 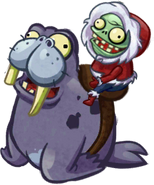 Lawnmower being used on Walrus Rider

Sizzle being used on Walrus Rider

Walrus Rider on the advertisement for the Neptuna Hero Pack 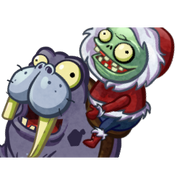 Walrus Rider with a star icon on its strength

Walrus Rider tinted gray due to a glitch

Walrus Rider with the

The player receiving Walrus Rider from a Premium Pack