This Zombie has the health of a Wall-nut

Has a health of a Wall-nut

ZomBotany
Only appears in ZomBotany and ZomBotany 2
Wall-nut Zombie only appears in the mini-games ZomBotany and ZomBotany 2 and has high toughness due to its Wall-nut head, meaning it takes 1300 damage. It is comparable to Buckethead Zombies but it is unaffected by Magnet-shrooms. Tall-nut Zombie, its more powerful counterpart, takes 2400 damage, which is 600 less than a Gargantuar, but still can be killed with any instant kill besides the Squash and Potato Mine. Like other ZomBotany zombies, it does not have an Suburban Almanac entry.

In Plants vs. Zombies: Journey to the West, Wall-nut Zombie will appear as a normal zombie starting in War of the Spider Woman.

Please note that the description below are taken from the Plants vs Zombies: Official Guide to Protecting Your Brains.

Wall-nut Zombies are equivalent to Buckethead Zombies in toughness, so most strategies against Buckethead Zombies will work against Wall-nut Zombie, except using Magnet-shrooms. It can be easily killed with an instant kill, but if you don't want to, just use a defensive plant to block and plant some shooters to deal with it, just like what you do with normal zombies. They are not a real threat comparing with the peashooting Peashooter Zombies because they don't shoot anything at you, so you can use the Garlic or a defensive plant.

A Wall-nut Zombie in the seed selection screen 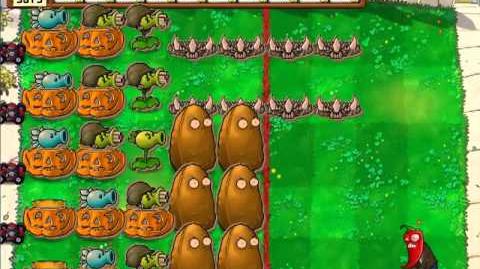 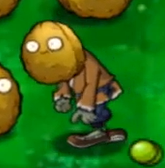