Stops zombies with its chewy shell

Beating Level 5 of The Boonies

Wall-nut was a plant in Plants vs. Zombies Adventures. It was unlocked after completing Level 5 of The Boonies. There was a VIP version called Hard-nut that was a tougher version of the Wall-nut. Wall-nut, along with Hard-nut, could be jumped over by Mall Cop Zombie. Unlike other plants, it could not be revived after it had been eaten. It disappeared after a Zombie Sneak Attack if it got eaten during the attack.

He is based on the plant from Plants vs. Zombies with the same name. 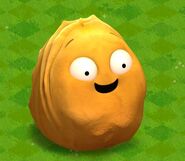 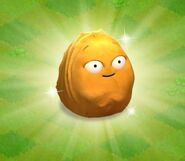 An official image in a promo for free Wall-nuts

Wall-nut in the RV with a Peashooter, Crazy Dave, and a Sunflower
Add a photo to this gallery

Retrieved from "https://plantsvszombies.fandom.com/wiki/Wall-nut_(PvZA)?oldid=2155246"
Community content is available under CC-BY-SA unless otherwise noted.