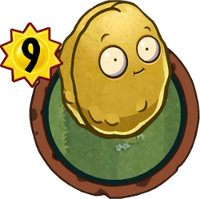 Not to be confused with Wall-nut Bowling, a mini-game from Plants vs. Zombies.

Make a Wall-Nut in each Ground lane. Attack for 6 damage in those lanes.
Ugly shoes not required!
Wall-Nut Bowling is a premium legendary plant trick card in Plants vs. Zombies Heroes and a member of the

Its name and ability comes from Wall-nut Bowling, a mini-game in Plants vs. Zombies. However, after the Wall-Nuts do their first offensive damage, they "return" to the plants' side for defense instead of bouncing off of zombies and continuing to advance.

Its flavor text refers to the special shoes used to play bowling in real life, which are mandatory since the bowling alley has slippery floors that normal shoes cannot walk on. In particular, it states that the shoes usually look less pleasing to the eye.

This trick can easily turn the tide to your favor if you manage to survive long enough to 9 sun, because it not only builds a Wall-Nut wall that protects you and your plants from zombies on ground lanes (that survive or bypass the 6 damage), but also does huge damage to each ground lane, severely injuring your opponent per empty lane, or a bulky zombie per occupied lane if it's not destroyed by the heavy damage.

Similar to Nut Signal, the Wall-Nuts made can be used as regular Wall-Nuts synergy-wise and thus can be used with Loco Coco, Pecanolith, or Three-Nut. Other classes also give exclusive synergies to each hero:

However, do note that Wall-Nut Bowling is countered hard by gravestones, which nullifies the damaging ability. While there are cards that can remove them off the field, they can cost heavily both sun and card wise: either 2 sun for each Grave Buster or Grave Mistake or 4 sun plus sacrificing a plant with one Blockbuster. The Parasol Zombie and Jurassic Zombie are also untrickable, and will therefore negate the damaging parts of the trick. Thus, if your opponent builds a wall of gravestones on ground lanes in anticipation of this trick, it is more wise to conserve Wall-Nut Bowling for later and respond with another strategy.

Try to cover the ground lanes because normally you can take up to 18 damage (with all three lanes empty) from this single strike, which leaves you with only 2 health at most, enough to put you on the verge of defeat by another plant if this didn't defeat you on its own.

Since this trick will also destroy or severely injure zombies played there, it is recommended to use Gravestone zombies or shielded zombies cards to make them or you invulnerable to the 6 damage, wasting the damaging ability to its lane while protecting your side from harm. You can also delay this trick by using Ra Zombie, Turquoise Skull Zombie, or Defensive End, or simply defeating your opponent with heavy pressure before they get the chance to play it.

If you anticipate that your opponent will use this card to destroy your zombies, then Parasol Zombie can be used to help keep them on the field.

The Wall-Nuts made are also a challenge to deal with. Weed Spray, Extinction Event, and Supernova Gargantuar are some of the best counters since they target all Wall-Nuts, some even before the ‘Fight!’ phase. If you don’t have one, prioritize the most significant lanes first and counter the Wall-Nut there quickly with tricks or strong (or