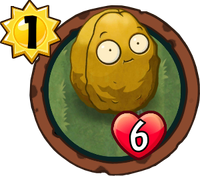 None
Works well with others. Says so, right there on his resume.

Wall-Nut is a basic common plant card in Plants vs. Zombies Heroes and a member of the

. He can also be made by Nut Signal, Template:PvZHLink, and Loco Coco. He has the Team-Up trait and does not have any abilities.

In the boss battle of the mission Code Orange! Citron Invades!, Citron starts with a Wall-Nut on the middle lane.

In the boss battle of the mission To the Moon!, Citron starts with three Wall-Nuts on the second, third, and fourth lanes.

His description is a reference to his use: protecting other plants from damage.

Works well with others. Says so, right there on his resume.

Wall-Nut's role is to take damage to protect either you, a powerful plant, or both. His cheap cost of 1 sun means that he can act as an early wall or an easily spammable fighter for certain plants.

Because of his nut tribe, he can be given more health with Smackadamia, or be paired up with Mirror-Nut to make your opponent think twice before playing damaging tricks on it. Pecanolith can also be used effectively with Wall-Nut, essentially turning him into a 6

. Spineapple, Three-Nut, and Loco Coco can also give Wall-Nut strength and can work with high-strength plants too, unlike Pecanolith.

Due to his health, Wall-Nut will not go down easily in the early game. A cheap and easy counter to Wall-Nut is Rolling Stone, and against a horde of Wall-Nuts, Weed Spray can be played a bit later. Also, zombies with

Deadly make quick work of him. If Wall-Nut is protecting a frail plant such as Mushroom Ringleader or Template:PvZHLink, using a

Strikethrough zombie such as Hot Dog Imp, Line Dancing Zombie, Template:PvZHLink, or any zombie in Laser Base Alpha can damage (and destroy for the last example) Wall-Nut and destroy the plant behind him.

Frenzy also works, but it is less effective in terms of clearing Wall-Nut as the zombie's strength must be higher than Wall-Nut's health. Thankfully, the two heroes who can utilize this trait, Neptuna and Template:PvZHLink, have a wide array of boosting cards to make the job easier.

Retrieved from "https://plantsvszombies.fandom.com/wiki/Wall-Nut_(PvZH)?oldid=2167727"
Community content is available under CC-BY-SA unless otherwise noted.