Wall-Not Attack is an achievement that can be obtained on the PlayStation Vita, iOS, and Android versions of Plants vs. Zombies. It requires the player to complete ZomBotany or ZomBotany 2 without using Wall-nuts, Tall-nuts, or Pumpkins. It is regarded to be very difficult as these defensive plants stop the peas shot by Peashooter and Gatling Pea Zombies.

The achievement's name is a pun on the phrase "will not attack."

The Garlic is a necessity on most strategies, due to its lane diversion that makes Peashooter Zombies shoot into empty rows. However, it should be used with caution, as while peas from Peashooter Zombies hit plants for a third of a bite, they hit Garlic with the power of a normal bite, although some players use this as an advantage as it can take 21 hits and acts as a better Wall-nut. Also, many strategies use Potato Mine, Puff-shroom, Sun-shroom, Spikeweed, and Spikerock because they cannot be hit by peas fired by Peashooter Zombies. Plants that attack other lanes are also recommended, but not needed. You could use Garlic to fend zombies away from a lane of Sunflowers, and use Spikeweeds since they can't get hit. Instant kills will help you earlier in the level.

This achievement is a little hard to beat, since defensive plants are usually a must in this mini-game, as Peashooter Zombies can attack from afar. But with the right strategy, this achievement will become easy to earn. It might be easier to earn this achievement if you choose plants to block other plants that are doing a lot of damage to the Zombotanies. Choose the following plants:

Buy the rake as well.

First, plant Sunflowers in in the first, third and fifth lanes, but if there is a rake on it, don't plant anything in that row yet. Then, when the second zombie comes, use Garlic to divert it, then, use Potato Mine. Repeat this and lay down double Garlics in the first, third and fifth lanes until multiple zombies come, then start laying down Spikeweeds and Spikerocks. Then once you can afford it, plant Gloom-shrooms on lane three behind the Garlics. Once you have a row of spike plants on lanes 2 and 4, plant three Gloom-shrooms on lane 3 behind Garlics, you should do fine. Remember though, regularly replace Garlics if they are nearly fully eaten.

Alternatively, you can use Squash in addition to Potato Mine and Imitater Potato Mine to earn a decent amount of sun first. Spikeweed and Spikerock should be sufficient to fight off the zombies if you do not have Gloom-shroom. If you find you have sun to spare, you may also plant Twin Sunflowers to get more sun, possibly also earning you the Sunny Days or Flower Power achievements.

And any other shooting plants.

Another strategy to get the achievement Pyromaniac at the same time

Start by planting as many Sunflowers as you can in the first, third, and fifth lanes. Plant two Garlics at the front of these to divert all the zombies into two lanes. Remember to replace your Garlics often. Plant Potato Mines ahead of zombies, as peas will pass over them. Use Cherry Bombs for small groups of zombies, Jalapenos for lanes full of zombies and Doom-shrooms for large waves of zombies. Plant Sunflowers, Potato Mines and other cheap plants to hold off zombies long enough for a plant to recharge if you need to. Also use Ice-shrooms to hold off a lot of zombies at once. Just be careful not to use any Lawn Mowers or Garden Rakes, or you will not get Pyromaniac at the same time.

Any other plants you will think will be useful. but never put Sun-shrooms. As you get more sun than it gives, and it requires a Coffee Bean, hence making it even more expensive. Some plants are small enough to dodge the Peashooter Zombie's attacks. For example, Puff-shrooms can easily take down Peashooter Zombies. However, Wall-nut Zombies will need more firepower. You can use a Doom-shroom or Hypno-shroom. Using this strategy you may also get the Good Morning achievement. Don't be afraid to use Lawn Mowers at anytime, unless it is the beginning of the level.

(Optional) Save up and turn all the Sunflowers into Twin Sunflowers.

Now, place Spikeweed in rows one, three, and five. Remember to replace Garlics when they are eaten, they are vital to win. Also, replace Potato Mines when they get blown up.

On the final wave, zombies build up in rows, so use instants to finish them all off. Congratulations, you earned Wall-Not Attack!

The rake is also highly advised.

First, place Sunflowers on the leftmost column and upgrade them to Twin Sunflowers. Use Scaredy-shrooms to prevent Peashooter Zombies from destroying your Sunflowers. Puff-shrooms won't work because they are too short and will avoid the peas. Start placing Cattails in the pool to kill Peashooter and Gatling Pea Zombies. These can also destroy Wall-nut and Tall-nut Zombies. Place Repeaters on rows one, two, five, and six to help destroy the zombies that come onto those rows. If a Squash Zombie appears, place a Scaredy-shroom in its path to make it kill itself. If a Jalapeno Zombie comes on the screen, kill it immediately or else it will wipe out a lot of your plants. Cherry Bombs and Squash should be used in an emergency.

Instant and One Use Plants Strategy

You got to plant the Sunflowers at rows that don't have Rakes, after that plant Potato Mines. If zombies already came, use Jalapenos, Squashes or Cherry-Bombs to give you even more time to plant Potato Mines. If you got a row with no plants, use Spikeweed to give you even more defense. When the Wall-Nut Zombies start coming, be sure to got a Squash to kill them. If everything goes wrong, Jalapenos and Cherry-Bombs will help you.

NOTE:You need 8 or more slots to get the achievement while farming money.

You can also use Twin Sunflower or Imitater (Marigold) if you have 9 or 10 slots.

Start by planting a Sunflower in either lane 1, 3 or 5. Then when a Zombie Peashooter appears in one of these lanes, plant a Garlic on the lane it's on and plant a Potato Mine on the lane it's on. Then keep doing it. Plant 3 Spikeweed on lanes 2 and 4 and plant the Marigolds between the Garlic and start picking up the money then plant 3 Fume-Shrooms in lane 3 between the 2 Marigolds and 2 Garlics. Then upgrade them to Gloom-shroom and wake them up with the Coffee Beans (You can do that before upgrading them). And if your Garlics get eaten or pea'd, plant another one.

I got this strategy from here. 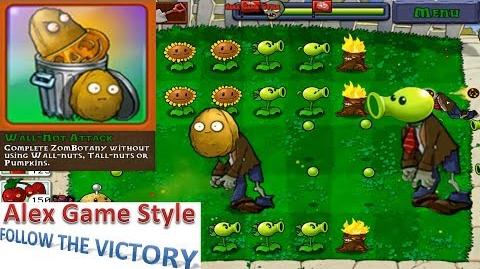 Retrieved from "https://plantsvszombies.fandom.com/wiki/Wall-Not_Attack?oldid=2333120"
Community content is available under CC-BY-SA unless otherwise noted.