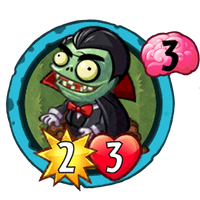 when it destroys a plant.
He vants to suck your chlorophyll.

Vimpire is a premium rare zombie card in Plants vs. Zombies Heroes and a member of the

Frenzy trait, and his ability gives him +2

every time he destroys a plant, unless he is destroyed in combat against one.

He is based on the Vampire Imp that appeared in the music video Stop Zombie Mouth!

His name is a portmanteau of "Imp," referring to the type of zombie he is, and "vampire," the mythical creature he is dressed up as.

His description saying "want" as "vant" is a reference to the stereotypical vampire accent, where the letter W is pronounced as a V. In addition, chlorophyll is the green pigment in the chloroplasts of plants, which is what gives plants their green color, making it similar to blood in a way.

He vants to suck your chlorophyll.

Frenzy trait, as it makes him hit harder and essentially heal a little as well. If used correctly, Vimpire can become a very strong zombie, making him difficult to be destroyed. His cost of 3 brains allows him to be played in the earlier turns, where less powerful plants may still be played. Since Vimpire is part of the Beastly class, which has many efficient boosting cards like Yeti Lunchbox and Vitamin Z, it is easy to boost his stats to protect him.

If possible, try to play Vimpire in front of plants with low stats like Poison Mushroom to make it easier for him to destroy that plant, while not getting destroyed himself. Shroom for Two is one of the best candidates, as he can destroy both Puff-Shroom and Shroom for Two with default stats and get two boosts on the same turn.

If Vimpire is about to face a plant that may destroy him, you can either reduce that plant's strength with cards like Nibble, Template:PvZHLink, and Stupid Cupid, move Vimpire away with Smoke Bomb, or play bonus attack cards like Lurch for Lunch to instantly activate his ability if he has enough strength to destroy that plant. If the aforementioned options are not viable, play instant-kill cards like Locust Swarm to save Vimpire.

As he is part of the Imp tribe, using him with Toxic Waste Imp allows him to destroy any plant he hurts, allowing his stats to snowball even when Vimpire is blocked by a tough wall. Using him with Imp Commander allows you to draw a card with each attack on your opponent, which is not going to be very hard if Vimpire has gained enough strength to plow through most plants. Remember though, only Template:PvZHLink can do both of these normally.

Pairing this with Biodome Botanist can give this card a boost for 1 damage, or even no damage if the plant made is frozen or Vimpire does a bonus attack, while pairing him with Ancient Vimpire will give him +4

after he destroys the plant.

However, Vimpire is completely inferior to Ancient Vimpire in every aspect aside from his cost, so his role is basically limited to being another

Frenzy zombie that can benefit from Ancient Vimpire's ability.

As for counters, there are plenty for Vimpire. If it is unboosted, Template:PvZHLink or Berry Blast can be played. If it has been boosted too much, Shamrocket can instantly dispose of him. However, the biggest counter for him is Template:PvZHLink, as it will instantly destroy Vimpire if he hurts it, so be wary if you are facing a

Do not play weak plants in front of him, since he will boost a fair amount when he destroys them to the extent that it will be very difficult to take him down. Examples of poor choices include Shroom for Two and Pear Cub (as Vimpire gains enough strength after destroying Pear Cub, and due to his

Frenzy trait, he is able to destroy Grizzly Pear and do damage to you too, all in a single turn of combat.)

If he has been played recently, try to counter him with strong plants, but if they are not available, then play a removal card like Template:PvZHLink, Template:PvZHLink, Berry Blast, Meteor Strike, or Whack-a-Zombie. Shamrocket can also be played if he gets boosted too much.

Bouncing him by playing Template:PvZHLink or Jumping Bean can also allow you to get rid of Vimpire, as well as reset his stats to normal, making your opponent's effort to make him powerful a big waste.

Using Garlic against this will instantly destroy him, but be careful as your opponent may have cards to either destroy, Bounce, move Garlic, or move Vimpire.

As a last-ditch effort, use

Freezing plants or tricks to stop him from attacking, such as Template:PvZHLink and Big Chill, giving you a chance to destroy him while he is vulnerable to damage.

Retrieved from "https://plantsvszombies.fandom.com/wiki/Vimpire?oldid=2150179"
Community content is available under CC-BY-SA unless otherwise noted.