When a Plant here does damage and survives, heal your Hero for that much.
Not far from Mercury Flytraplanet.
Venus Flytraplanet is a galactic uncommon plant environment card in Plants vs. Zombies Heroes and a member of the

to play, and its ability heals the plant hero for the equal amount of damage all plants that survive the current turn of combat in it do. This ability persists until Venus Flytraplanet is removed from the field.

It is based on a Venus flytrap (Dionaea muscipula), a carnivorous plant that catches its prey with a trapping structure formed by the terminal portion of each of the plant's leaves, and a planet, possibly Venus, a planet from the Solar System.

Its name is a portmanteau of "Venus flytrap," the plant it is based on, "Venus," and "planet," an astronomical body orbiting a star or stellar remnant.

Its description references how Venus and Mercury are close to each other.

Not far from Mercury Flytraplanet.

This environment allows any plant to essentially function like Venus Flytrap. Due to this, it can easily be used to put yourself back on the upper hand in terms of health.

Playing a strong plant in this environment can allow you to rejuvenate most of your health in a very short amount of time. Plants with the

Strikethrough trait are also of note when played in Venus Flytraplanet. Since their attacks do damage to both the zombie on the field and the zombie hero behind, this combo can essentially allow you to heal for double the plant's strength. Plants that attack in multiple lanes or have Splash Damage can also be used to maximize the amount healed.

Unfortunately, you also need to keep the plant in the environment alive, otherwise, its ability will not activate. This means that strong zombies, plant-harming tricks, and bonus attacks will prevent you from healing, nor can you swarm with cheap, low-health plants for massive healing. However, this environment's ability also activates by any form of damage done by the plant to anything from your opponent's side. This makes plants whose ability activates when played very useful, as your opponent can't deal with that unless they block it. While such plants are only normally playable as Solar Flare, they are exceptionally powerful examples.

For example, just by playing Kernel Corn, you will heal for 4 health per zombie on the field. Dandy Lion King's ability to cut half of your opponent's health also activates Venus Flytraplanet's ability; the more health your opponent has, the better. While not having "When played" abilities, other powerful examples include Mirror-Nut, Sergeant Strongberry, Admiral Navy Bean, and Punish-Shroom.

It is highly recommended to bring Pepper M.D.s with this environment, as healing will be rampant while this environment is in play, especially in conjunction with plants who have an attack that do damage to multiple targets or plants who attack multiple times. Since Venus Flytraplanet's healing ability activates for each individual hit, this results in it healing multiple times, which in turn activates Pepper M.D.'s ability multiple times as well. Some examples would be plants with Splash Damage, Kernel Corn, and even offensive Team-Up plants.

If this cannot be done, the next best solution is to do whatever it takes to prevent the plant in the environment from being a threat, such as destroying or Bouncing that plant. You can also have Sneezing Zombie on the field to make the environment useless. One can also bounce it with the Excavator Zombie. 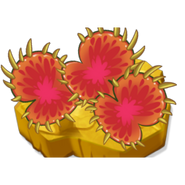 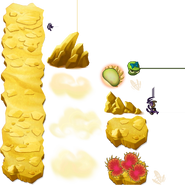 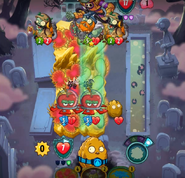 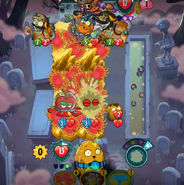