Plants vs. Zombies Wiki
Register
Don't have an account?
Sign In
Advertisement
in: China exclusive, Archived, Plants,
and 7 more
English

For other uses, see Venus Flytrap.

Venus Flytraps stall zombies and do not let them advance.

Beating Qin Shi Huang Mausoleum - Level 5-1
Venus Flytrap (捕蝇草; pinyin: bǔ yíng cǎo) was a plant from Plants vs. Zombies Online. It stalled zombies using its mouth. This effect did not do any damage however, unless the plant had been upgraded.

When fed Plant Food, the Venus Flytrap caught zombies in its range and ate them, similarly to Chomper and Toadstool.

When fed with Plant Food, the Venus Flytrap dealt damage to the target with a side effect.

Can now damage the zombie it stalls

Due to the lack of a reliable attack without Greenhouse upgrades, it should be used like a Wall-nut. Upsides are it being able to survive a single zombie forever. A downside is that, on its own, it will die if a second zombie appears, as it can catch only one of them at a time. Also, this plant cannot stall Gargantuars due to their size.

It is highly advisable to use them mostly in the beginning of the level, as it makes setting up a defense easier. It can also be used to counter Shield Zombies since, in the game, Shield Zombies are tougher, both in their base health and their shield's strength. 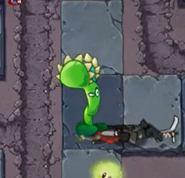 One of Venus Flytrap's costumes (medal)

A Venus Flytrap (in its original design) in the Plants vs. Zombies: Boom Boom Mushroom comic 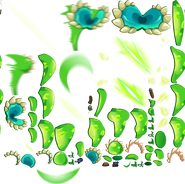