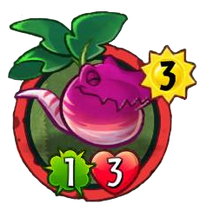 For other versions, please refer to the Veloci-Radish (disambiguation) page.

It is based on the velociraptor, a genus of dromaeosaurid therapod dinosaur that lived approximately 75 to 71 million years ago during later parts of the Cretaceous Period, and the radish (Raphanus raphanistrum subsp. sativus), an edible root vegetable of the Brassicaceae family that was domesticated in Europe in pre-Roman times.

Since Veloci-Radish Hunter fights in twos, it functions differently from other Dino-Roar cards that boast huge stats. It is less vulnerable to anything that can destroy it, which is a huge plus. But if one gets destroyed, its firepower is also cut by half. That means that this has both pros and cons.