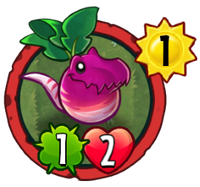 .
The root of all primeval.
Veloci-Radish Hatchling is a triassic uncommon plant card in Plants vs. Zombies Heroes and a member of the

. It does not have any traits, and its Dino-Roar ability gives it +1

It is based on the radish (Raphanus raphanistrum subsp. sativus), an edible root vegetable of the Brassicaceae family that was domesticated in Europe in pre-Roman times; and the Velociraptor, a genus of dromaeosaurid therapod dinosaur that lived approximately 75 to 71 million years ago during later parts of the Cretaceous Period.

Its description is a play on "root of all evil," a phrase that is part of the sentence "For the love of money is the root of all evil" from the Bible's First Epistle to Timothy, but the word "primeval" is used instead of "evil," referring to it being based on a dinosaur. There is also a double meaning in "root," referring to its root tribe too.

The root of all primeval.

Veloci-Radish Hatchling is a fragile early-game plant with an ability that allows it to steadily accumulate strength. It basically gets +1

at the start of every turn, and can gain more by drawing cards.

The only issues with it are that it can't boost its health, and that the Kabloom class severely lacks card draw, with the only option being Petal-Morphosis, which isn't an effective option at all in terms of drawing cards. There are a few Conjuring options like Cosmic Mushroom and High-Voltage Currant, but they can only do so much too. You can solve that problem easily if you are playing as Captain Combustible or Nightcap, but other heroes will most likely struggle at boosting this plant. While not contributing much in terms of card draw, Spudow can increase this plant's health with cards like Photosynthesizer (which also Conjures a card) and Bubble Up. He can also use Starch-Lord to boost it upon playing (although playing Veloci-Radish Hatchling on turn 5 is not a viable play), and continue to boost it every turn by Conjuring roots.

Due to its low stats, you should not directly confront it with a zombie, unless you need to block it. Giving it health boosts,

Freezing or Bouncing zombies, and protecting it with Team-Up plants are good ways to let it grow safely, but it will later be outclassed by Veloci-Radish Hunter, so plan when to stop focusing on this plant.

Veloci-Radish Hatchling is very weak in terms of both strength and health, so it shouldn't cause much trouble to your zombies. However, if you do let it accumulate strength, it will prove to be a bigger pain to your zombies, so eliminate it before it gets to do that. Rolling Stone and Bungee Plumber are two quick and easy answers to it that can be played starting from turn 1. If it does gain too much strength, Rocket Science can destroy it if you lack damaging cards.

Veloci-Radish Hatchling attacking from the player's point of view

Veloci-Radish Hatchling attacking from the opponent's point of view