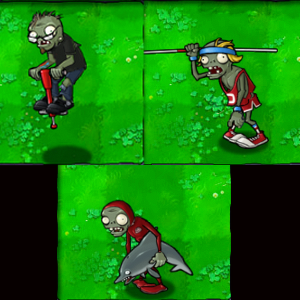 Vaulting zombies are zombies that have the ability to jump over the player's plants and are faster than most zombies. Most of them lose their jumping ability and all of them slow down after one jump. Vaulting Zombies can not jump over Tall-nuts and Pogo Zombies' pogo stick can be stolen by a Magnet-shroom.

Pole Vaulting Zombie - Moves faster while holding its pole and can jump over the first plant it encounters (on Tall-nuts, it does not jump over it, and Spikeweed and Spikerock are ignored). Slows down drastically after jumping.

Dolphin Rider Zombie - They travel faster while on the dolphin and can jump over the first plant it encounters (excluding Tall-nuts if they are not planted in the first square). They slow down after jumping over the first plant they encounter. They can only be found in the Pool. Before losing their dolphin, they can dodge lobbed shots.

Pogo Zombie - Faster than other zombies and does not lose its jumping ability after jumping over a plant. As usual, they cannot jump over Tall-nuts, and it can have its Pogo Stick taken away by a Magnet-shroom. It cannot be paralyzed by a Kernel-pult while they still have the stick, and they move slightly faster than a usual Zombie would walk.

The best strategy to stop any of these zombies is a Tall-nut. They cannot jump over it. If you don't have the Tall-nut, there are other ways to get rid of them.

To get rid of the Pole Vaulting Zombies, use a Sunflower, Puff-shroom or other cheap plants to make them jump, but not plants that have a slow recharge, as they will be substantially slower afterwards. Also, two Peashooters can kill them before they even have a chance to jump. The same goes for the Dolphin Rider Zombies; Lily Pads or Sea-shrooms must be used instead (but not in the rightmost column as they will not jump, they only jump when something is in the square ahead of them). However, if your Squash or Tangle Kelp has recharged, there should be no problem with any of these three. The Pogo Zombies are a bit harder, as they will not stop jumping after one jump. Thankfully, their Pogo Sticks are magnetic, so a Magnet-shroom would be useful. Also, they are knocked away if they bump into Tall-nuts. They also shouldn't be a problem if you have a properly defended lane.