Vasebreaker Endless is the endless mode version of Vasebreaker. It is different than the one in the international version, as there are different plants to use, and it takes place in different worlds instead of the Player's House After each wave, the player gets to choose 3 prizes as if it's a Piñata Party. You can get Puzzle Pieces after finishing a specific number of waves up to 40.

Power Ups are unlocked from the get-go, and all three are available to the player at any time for 8000 coins. Even though Move Vase is available from the get-go, you still get to "obtain" it after completing 15 waves of Vasebreaker Endless.

Aside from Power-Ups, there is also a Cherry Bomb, which can be used for 150 sun. 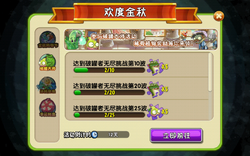 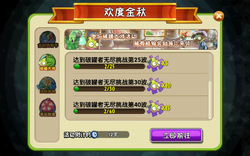 The puzzle pieces in presents also change. During the first event the player could get 300, 1000, or 2000 coins, or 1 Spikerock, Pea Pod, Winter Melon, Fume-shroom, or Rafflesia puzzle piece.

The first few waves are a cakewalk, you are given very powerful plants such as Homing Thistle. It is recommended that the player should break one vase at a time, since Homing Thistles are less effective when there are more zombies. Plant your Squashes next to the purple vases, optimally when multiple Gargantuars are behind them.

Remember that you have Power Ups, but since they cost more here than in the international version, as well as presents only granting a maximum of 3000 coins, it is recommended that you don't use them unless all other options such as using Plant Food and Cherry Bombs have been exhausted.

The core strategy behind this vasebreaker is using Hot Date to clear 3 lanes of zombies at once and deal massive damage to as many Vase Gargantuars as possible.

All remaining lanes without Vase Gargantuars can easily be handled by single Kinnikannon, either Bonk Choy or Zorrose and Vax Guard planted in this order starting from column 1. Another way to clear those lanes is via Kinnikannon's Plant Food.

For the lanes with Vase Gargantuars try planting as many Kinnikannons as possible. Angel Starfruits should be planted in the farthest tiles from the house to deal damage without a possibilty of being eaten. Don't forget that Bonk Choy can attack zombies from behind, which together with stalling can lead to great amounts of damage dealt to Gargantuars.

Use extra Plant Foods and Cherry Bombs in case something goes wrong.