Plants vs. Zombies Wiki
Register
Don't have an account?
Sign In
Advertisement
in: Modes, Puzzle Mode, Night,
and 4 more
English

For this mini-game in Plants vs. Zombies 2, see Vasebreaker (PvZ2).

Vasebreaker is one of the series in the Puzzle Mode levels in Plants vs. Zombies. It involves using mallets to break open vases to obtain plants and kill zombies. The focus of this puzzle is to stimulate the player's ability to think critically and to formulate their own strategy, as randomly breaking vases will increase the chances of the player's brain being eaten. Each vase will either have a plant or zombie in it, except for the green vases with leaves printed on them, which will always contain plants. Vasebreaker offers a unique variation on the basic gameplay by allowing the player to control the speed at which the new plants or zombies arrive.

The sound when a vase is cracked broken. 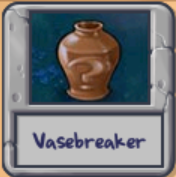 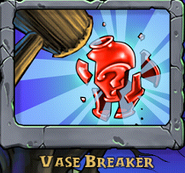 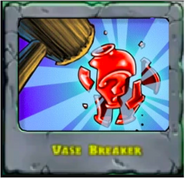 M is for Metal

There are ten Vasebreaker levels, each one progressing in difficulty from the last.

As stated by the Tree of Wisdom, Vasebreaker is easier if you break right side first, then progress to the left. If you get a Squash, look for a Buckethead Zombie or other tough zombies that need killing, or simply use it to kill all zombies in a whole lane by breaking a vase when a zombie from the right side reach it. Another good idea is breaking the green vases first since they always have plants in them. Put them in separately and only then break the rightmost vases on the now protected lanes.

Gargantuars can help the player, as they break open the vases for them. Jack-in-the-Box Zombies also help, as their explosion can smash vases as well.

Planterns can reveal the insides of vases in a 3x3 area; they should be planted in the middle of a large group of vases. Place the two Threepeaters in rows 2 and 4 to cover all rows quickly.

Only use Cherry Bomb if extremely necessary, because this will likely use up most of your sun and has a slow recharge.

Vasebreaker in the iOS version 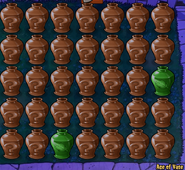 The vases in Ace of Vase 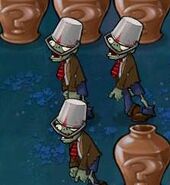 A level of Vasebreaker in action

A Snow Pea fighting a Zombie

Another game in progress

A mystery vase in the Nintendo DS version

A plant vase in the Nintendo DS version 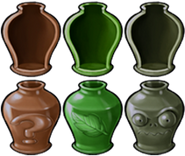 The three vases with the unused zombie vase