Not to be confused with Porcelain Vase Weed.

5 min.
Vase Weed is a Spawnable Weed in Plants vs. Zombies: Garden Warfare 2 and Plants vs. Zombies: Battle for Neighborville. He is a normal Weed that supposedly has grown upside-down into the vase he was planted into and now uses it as a highly protective form of body armor.

​This Weed grew into a vase and plays it off like he did it on purpose. Luckily, vases are super protective.

The vase can substain 295 damage before being destroyed 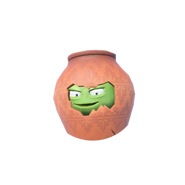 Retrieved from "https://plantsvszombies.fandom.com/wiki/Vase_Weed?oldid=2286525"
Community content is available under CC-BY-SA unless otherwise noted.