Not to be confused with Fanilla. 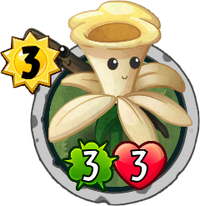 None
"I'm sorry, it's just... I have nothing interesting to say."
Vanilla is a premium uncommon plant card in Plants vs. Zombies Heroes and a member of the

It is based on the vanilla orchid, likely the flat-leaved vanilla (Vanilla planifolia) and its fruit. The vanilla flower's shape and projectile may also be references to an ice cream cone and vanilla ice cream.

It is also a pun on the aforementioned plant, the flavoring it produces, and the adjective meaning of "vanilla," describing the simplest version of something, without any optional extras, basic or ordinary, referring to its lack of traits and abilities, and possibly the vanilla flavor of ice cream (which is its projectile) as well, which is sometimes described as boring and flavorless. This is also referenced in its description, as it claims to have nothing interesting to say and, the fact is has no traits or abilities.

"I'm sorry, it's just... I have nothing interesting to say."

Vanilla has average but decent stats for a 3

plant. Not only that, it also has good tribe synergy, with its bean tribe going nicely with Admiral Navy Bean and Bean Counter, while its flower tribe makes it synergizable with Power Flower and Briar Rose.

Unfortunately, Vanilla's lack of traits and abilities means that they are outclassed by many plants, even among other 3-sun plants. The best examples of such 3-sun plants are Sportacus, who has the same stats as Vanilla but also a very useful ability, and Cool Bean, who can easily threaten gravestone decks and synergize nicely with

Freeze decks with its ability and also has bean synergy. Although neither Sportacus or Cool Bean has flower synergy, flower synergy only matters as Rose, and even then, Rose has many other flowers better than Vanilla.

This plant is relatively harmless, but early on in the game, it can prove to be a moderate threat due to its decent stats. In addition, the two aforementioned flowers can make them more formidable. The best way to dispose of this is to use something cheap, but strong at the same time. Glass cannons such as Tennis Champ or Cuckoo Zombie can destroy them with ease. If you are desperate, tricks are an alternative way to get rid of this plant.

Knockout is the best counter to this plant, since it can destroy Vanilla and any other plant on its lane instantly. You can also use superpowers like Slammin' Smackdown or Electrobolt, although there will most likely be better targets for them.