Special
When a zombie stumbles into a Vampweed, you get a helpful health boost! The zombie isn't hurt, but he probably feels a bit silly falling into your trap.
Vampweed is an alternate ability for the Chomper's Spikeweed in Plants vs. Zombies: Garden Warfare 2. It can be obtained through Rux's Bazaar for a limited time, for 500,000 coins. Similar to the Spikeweed, when a zombie walks onto it, that zombie will be trapped for a few seconds. However, it will not damage the ensnared zombie, instead healing its owner by 40 health. Like the Spiky Spikeweed (and Chesterweed, which is a reskin of the Spiky Spikeweed, but is only available in the original Garden Warfare), you can only have 2 of them at one time. Individually, they take 1 minute to recharge, but if you swallow a zombie with the Vampweed you placed, you'll instantly get the Vampweed back.

When a zombie stumbles into a Vampweed, you get a helpful health boost! The zombie isn't hurt, but he probably feels a bit silly falling into your trap.

Because of the nature of this Spikeweed, it is more suitable for an offensive use than a defensive one. Use it to deactivate abilities from zombies such as Captain Deadbeard and Engineer. Another good strategy would be to use this on a gooped zombie before swallowing them to survive longer. Using this strategy with Count Chompula is very effective because you can regain 90 health with each zombie swallowed. This is also good with Hot Rod Chomper because it gives a better chance at escaping zombies attacking you after you have swallowed a zombie. Using disco chomper is also a good strategy, as it heals yourself and does not deal any damage to the zombie, removing the risk of vanquishing the zombie with a spikeweed instead of swallowing that zombie. It is not recommended to use the Vampweeds as a defensive tactic because it will not help the teammates other than snaring the zombie and its colors make it hard to blend with the environment.

Try to counter this like a regular Spikeweed. Do not let the Chompers get close to you and watch out for the Vampweeds if you are using an ability. Even though this does not damage you, it makes you very vulnerable and very easy to hit if you are trapped, and you are likely to be vanquished or seriously damaged if you are trapped with other plants nearby, especially the owner of the Vampweed or other Chompers that can swallow you whole while you are caught. 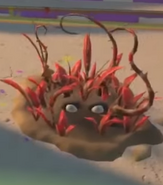