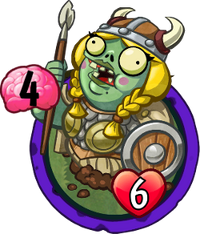 While in your hand: This gets +2

when a Zombie is destroyed.
It's not easy hitting those high notes when all you can sing is, "Braaaaains."
Valkyrie is a premium legendary zombie card in Plants vs. Zombies Heroes and a member of the

. She does not have any traits, and her ability gives her +2

every time a zombie (that isn't in a gravestone) on the field is destroyed while she is in the zombie hero's hand.

She is based on a valkyrie, one of a host of female figures in Norse mythology who chooses those who may die in battle and those who may live. Valkyrie's design may be a reference to the proverb "It ain't over till the fat lady sings", as her design is based on the stereotypical design of the "fat lady" mentioned in the proverb (the valkyrie Brunhild).

It's not easy hitting those high notes when all you can sing is, "Braaaaains."

Valkyrie is a unique card, starting with no strength. However, while she is in your hand, she gains 2 strength for every zombie destroyed. With the right deck, Valkyrie's strength will skyrocket to the point where she can take down your opponent or pretty much any plant in a single attack.

A rush deck that consists of many low-health zombies is the best, as it lets Valkyrie gain strength faster. The Crazy class is suited for this, as it includes lots of frail zombies like Mystery Egg, Tennis Champ, and Barrel of Deadbeards, as well as zombies that make other zombies like Disco Zombie and Zombie's Best Friend. Also, it is advisable to hold onto Valkyrie as late as possible to maximize the strength boosts given to her. While you could send her out as soon as she gets a few strength boosts so that she can act as a powerful fighter, letting her finish off your opponent in a hit or two is a stronger strategy. Holding onto Valkyrie then unleashing the card at the correct moment is critical too.

Remember that Smarty Heroes can bounce her, removing all strength boosts. Therefore, it is often ill-advised for players to build decks entirely around the Valkyrie. Have something else just in case.

Every Crazy hero has their own synergies with Valkyrie:

Try to keep Valkyrie in your hand during the mulligan to maximize her ability.

If gained via Portal Technician or Zombot Dinotronic Mechasaur, which plays her directly on the field, this zombie is a useless wall since her ability cannot activate. It is advisable to allow the opponent to remove her, use Final Mission for extra damage, or play an Evolution Zombie on her. Alternatively, you can Bounce her with Secret Agent or Firefighter so that she can function normally. However, only Impfinity and Electric Boogaloo are able to reuse her.

Valkyrie can easily amass strength and finish you off in only a few attacks, so do not let her hit you. Due to her high health, instant-kill cards like Squash, Doom-Shroom and Cob Cannon would be the best strategy (unless professor Brainstorm plays the Parasol Zombie, which would leave non-tricks the only option), and since Valkyrie will most likely be played late in the game, you will not have to worry about not having enough sun to counter an early Valkyrie. Or, you could Bounce her to remove all her strength; since your opponent will have sacrificed many zombies to boost Valkyrie's strength, they may not have very much left to fight back once you remove her. If you have to use plants or tricks, use something that can do 6 damage at once, or stall her with

Freezing her is also a good idea. But no matter what strategy you use, avoid the situation where you have spent all your cards and have nothing to counter, or at least block Valkyrie.

Professor Brainstorm can either teleport Valkyrie in or use Lurch for Lunch/Mustache Monument to end the game with a bonus attack.

Smarty heroes can play Brainana to counter the teleport strategy, while

Solar heroes have access to Wing-Nut to disable any bonus attacks. However, these counter cards are not perfect, as Brainana cannot prevent bonus attacks, while Wing-Nut cannot prevent Valkyrie from being teleported in. Only Rose has access to both cards, so any other hero leading one of these classes must pay extra care. Guardian Heroes can use Soul Patch and a Force Field to neutralize her high strength, although they must either protect Soul Patch with Umbrella Leaf (exclusive to Grass Knuckles) or simply stay alert. They could use Pecanolith to render the additional strength she got useless, but you should only do this if her strength is over 6, and even then, this isn't the most viable strategy against Valkyrie alone.

As Valkyrie is usually played later in the game, however, the best strategy is to quickly finish the game before she can be played.