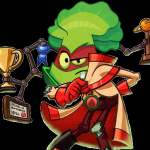 Don't worry, I might get some works from this wiki and trying to support everything...

The resource I used is the iPad mini (and iPhone sometimes) which makes the images look good and later if it's based on a plant/zombie, I'll editing it in Paint. (if you people sees this, don't be mad about it, I'm trying to do my best in this wiki)

I might post latest things happening at PvZ2 (which usually Arena) and other things with plants and zombies. Plus I might be busy with College... (I always check the images if somebody (Lawly) has done it or not)

I'm not very active with PvZ Heroes for now because there's nothing new yet or no new plant/zombie heroes released like almost two years.

Days after the Year Streak: 253

Username (if you want to add me) - ferdate

Note: I didn't play as the zombies by that time but now, many...

My Plants vs. Zombies game(s)

Plants vs Zombies 2 - Played it like almost everyday... (you know, Pinata Parties)

Plants vs Zombies 3 - Got the soft launched game in my country and it's fun... (still working on playing the game)

Plants vs Zombies Heroes - Played it when the trailer release like minutes and immediately played when it out and I enjoyed it alot. I reached the Ultimate League 11 times. (But noy playing it for now due to make room for the third game to work in my iPhone)

Other Games I played

Retrieved from "https://plantsvszombies.fandom.com/wiki/User:ResearcherFerd?oldid=2336123"
Community content is available under CC-BY-SA unless otherwise noted.