Uplink Bot's here to call for backup. Exploding sky laser backup.
Uplink Bot is a Spawnable Zombie Bot in Plants vs. Zombies: Garden Warfare 2. It attacks by firing a purple laser into the air, which calls in a devastating airstrike on enemies at long range. The area where the attack lands are marked by a purple beam of light right before the airstrike lands. It is the Zombie counterpart of the Bamboo Shoot. Its attack is named Orbital Bombardment and deals 60 damage per explosion.

It has a Lawn of Doom variant named the Haunted Uplink Bot. It resembles a plastic pail filled with candy, it was exclusive to seasonal Lawn of Doom stickerpacks. Despite its unique appearance, it was functionally identical to the default Uplink Bot and had the same health and damage stats.

A legendary variant of the Uplink Bot called DJ Uplink was created and was available for purchase from Rux. It has increased health and can fire a more damaging laser, which it could also fire faster than normal, making it a direct upgrade to the normal Uplink Bot. Its attack is also different colors, although it has no effect on gameplay. Its attack is called Party Hammer and deals 80 damage. However, since the main robot itself also has luminescent colors, it is much easier for plants to spot and take down.

LONG RANGE: AIRSTRIKE
This Uplink Bot is haunted. That is a fact.

While the airstrike is powerful and long range, the fire rate is slow, meaning it can be sniped very easily. It is recommended to build it behind the graveyard.

If you see the laser beam attacking, look for a purple beam firing up. This will be the bot, so sneak round to where it is to destroy it before it becomes a problem. 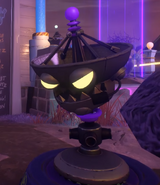 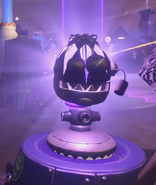 Uplink Bot about to call an exploding laser 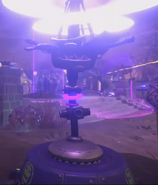 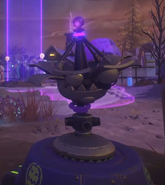 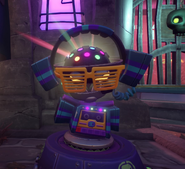