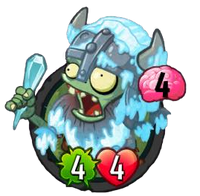 Freeze all Plants in the Water.
Pirate Evolution: Instead,

Freeze all Plants.
What's the best way to cross the ocean? Freeze it first. How hard could it be?
Unthawed Viking is a triassic super-rare zombie card in Plants vs. Zombies Heroes and a member of the

. It has the Amphibious trait, and its ability gives all plants on aquatic lanes the

Freeze effect, while its Pirate Evolution ability gives all plants the

It is based on a viking, a Norse seafarer who raided and traded from the Vikings' Scandinavian homelands across wide areas of northern, central, and Eastern Europe and to some extent, northern North America, during the late 8th to the late 11th centuries.

Its name is a combination of "unthawed," another word for "frozen," referring to its appearance and ability, and "Viking," the historical people it is based on.

Its description is a reference to its normal ability. It is also a reference to how ancient humans and animals migrated across oceans, as at that time, it was entirely frozen and allowed them to cross.

What's the best way to cross the ocean? Freeze it first. How hard could it be?

This zombie has pretty average stats for its cost, so it won't shine as a fighter itself, but its abilities are the interesting part.

Freezes only the plants on aquatic lanes, which isn't very useful because there is only one aquatic lane in a competitive match, allowing only one or two plants to be frozen. This ability is also useless against Captain Combustible, Solar Flare, and Chompzilla as they don't have access to Amphibious plants, and the heroes that do might not even have any Amphibious plants in their deck. Even if you do face an opponent with them, very few are threatening enough to be frozen, and even then, most have abilities that activate even if they are. The only exception is if your opponent starts playing Lily Pads, which allows the threats in the other classes to be played on the aquatic lane.

On the other hand, its Pirate Evolution ability is very useful as it

Freezes every plant on the field when played this way. Combined with its normal ability, they make a better version of Frozen Tundra. As Neptuna, you can use this in conjunction with Bonus Track Buckethead to lock down your opponent, as

Mega-Grow heroes cannot thaw their plants when that zombie is present.

There are several good pirates to choose, like Monkey Smuggler, Imp Commander, Swabbie, Buried Treasure, and Space Pirate. Swabbie and Buried Treasure are especially good since the former doesn't require any brains to activate Unthawed Viking's Evolution ability, while the latter activates its Fusion ability too. But the only downside of this ability is that unless you use Swabbie, Unthawed Viking cannot be used as a fighter on the aquatic lane as all pirates but Swabbie, Zombot Plank Walker, Zombot Aerostatic Gondola, and Unthawed Viking don't have the Amphibious trait, and the latter three are much too expensive for Evolution, Atleast you can have a good 4 damage kick to the Plant Hero in a ground lane or heights.

As of synergies, Unthawed Viking is a fantastic addition to a

Freeze deck, being able to massively boost Cryo-Yeti, possibly making him a game ender, but Cryo-Yeti must be put in a pirate deck, or a deck with at least a few pirates in it in this case. Speaking of pirates, Unthawed Viking can synergize with Swashbuckler Zombie and Captain Flameface, but remember that you can't play him on the aquatic lane and activate his Evolution ability at the same time unless you have some Swabbies.

Unthawed Viking is very dangerous, but only if its Evolution ability activates, as it stops all your plants for a turn. Since this ability activates when it is played, there is not much you can do about it either. The best you can do is to destroy as many pirates as possible, but you will not be able to do anything when your opponent plays a Swabbie. In case your plants get frozen, either thaw them with bonus attacks, or prepare for the worst. Fortunately, most abilities still activate even when they are frozen. You can also use

Double Strike plants or bonus attacks so that they can attack at least once even if they are frozen. However, this is useless if Bonus Track Buckethead is on the field or those said plants are destroyed during combat.

Instead of defeating him, Unthawed Viking itself isn't too much of a threat, and many cards like Shamrocket and two Banana Bombs can easily take it out.

Retrieved from "https://plantsvszombies.fandom.com/wiki/Unthawed_Viking?oldid=2311804"
Community content is available under CC-BY-SA unless otherwise noted.