For the same Brain Buster in the Chinese version of Plants vs. Zombies 2, see Unsodded.

A money bag
Unsodded is a canceled mini-game in Plants vs. Zombies. It takes place in the Day area and can still be played by using a Cheat Engine.

In this mini-game, there are only three lanes that can be planted on, similar to level 1-2, and level 1-3 but unlike those levels zombies will still come in those lanes. Despite the seemingly difficult appearance of this level, it is actually quite easy because the player is given plenty of time to build their defenses before zombies start coming into the top and bottom rows.

If the player changes the name of a save file from this game to the name of Survival: Endless save files (usually game_13), he or she will get a Survival: Endless variation, which is slightly different from this mini-game: the first and last lanes now appear normal, but they still cannot plant on there, nor will any zombies come from there (they will in the mini-game).

Main article: Limbo Page This mini-game along with other scrapped mini-games is stored in the Limbo Page. The player must gain access to it before playing this mini-game.

Add three addresses and change all values to 144.

Zombies will appear on the lanes where you cannot plant. Therefore, good use of Threepeaters and instant-kill plants that damage multiple lanes (such as the Cherry Bomb) is recommended. The Starfruit would also come in handy. Gloom-shrooms are also a good choice (they require Fume-shrooms and Coffee Beans, though). Do not bring Jalapeno, as it will not affect zombies in lanes that you cannot plant. It is not recommended to use Flower Pot on unsodded land as you can't plant there. Avoid plants that can only cover one lane.

Combination of two strategies together 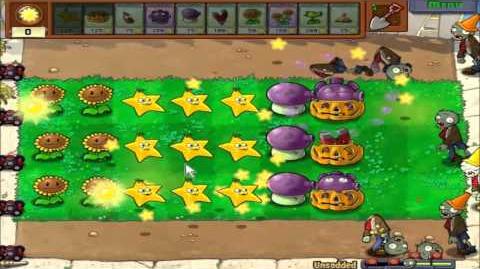 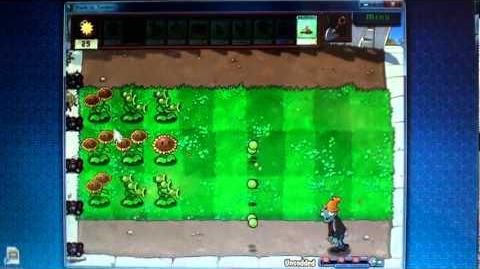 Plants Vs. Zombies Unsodded (Hidden Mini-Game)
A walkthrough of the level
Add a photo to this gallery

Retrieved from "https://plantsvszombies.fandom.com/wiki/Unsodded?oldid=2288267"
Community content is available under CC-BY-SA unless otherwise noted.