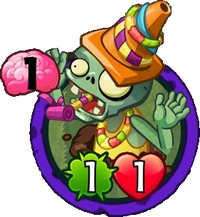 Unlife of the Party

when you play a Zombie.
His archenemy is the Wall-Flower.

Unlife of the Party is a premium uncommon zombie card in Plants vs. Zombies Heroes and a member of the

every time a zombie is played or made. His closest plant counterpart is Muscle Sprout.

His description is a pun on "wallflower," which is a shy and introverted person. However, it is spelled as "Wall-Flower," humorously making it sound like a plant from a Plants vs. Zombies game.

His archenemy is the Wall-Flower.

This zombie is essentially a stronger Backup Dancer as they both are in the dancing tribe (although Backup Dancer can be used in mustache decks) as well as a powerful ability. Disco-Tron 3000 is a good combo with this, because Unlife of the Party will get +3

. Barrel Roller Zombie will also give him +3

for both him and the Swabbies he makes when he is destroyed. If you do not have Disco-Tron 3000 or Barrel Roller Zombie, any zombie that can get out others in one play like Disco Zombie, Dance Off, or Triple Threat is an alternative since they give him +2

. Imp-Throwing Gargantuar can also help, as every time he is damaged, he will make a Swabbie on the field, which will increase Unlife of the Party's stats. Using zombies that can boost this zombie such as Loudmouth and Coffee Zombie can help out as well.

It is best to play Unlife of the Party only when you can flood the field with multiple zombies during the same turn. Otherwise, he will get destroyed quickly. Play him on an empty lane so he can unleash his full potential. Try to keep him alive as long as possible, as every new zombie that you play or make makes him stronger. You can use health-boosting tricks such as Camel Crossing to keep him alive as well.

When this appears unboosted, use any damaging plant or trick to destroy him. However, when he gets boosted, you may use instant-kill tricks or transforming tricks such as Goatify and Transmogrify. You can also use Shamrocket or Doom-Shroom to destroy him (as well as other strong zombies for the latter) if he gets too powerful. If those aren't options, resort to Bouncing and

Freezing, although they are temporary solutions.

Retrieved from "https://plantsvszombies.fandom.com/wiki/Unlife_of_the_Party?oldid=2151462"
Community content is available under CC-BY-SA unless otherwise noted.