With his mystic horn and toothy grin, the Unicorn Chomper isn't just the rarest of the rare, he's the coolest of the cool. Impress and dazzle friends and enemies alike!

Awarded to only the most dedicated Garden Warfare players, the Unicorn Chomper is beyond rare.

Utilize Unicorn Chomper the same way you would with Chomper, due to their stats being the exact same. The key difference between these two, however, is the former's ability to use Rainbow Warp instead of Burrow. This allows for a hit-and-run tactic: warp up to an opponent who is facing away from you, swallow them, and then quickly warp to safety.

Likewise, the two Rainbow Warps can be used for quickly entering or retreating battle.

Unicorn Chomper on a Sticker Pack 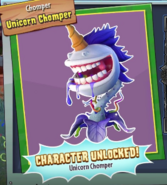 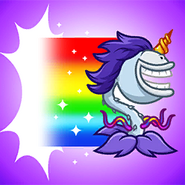 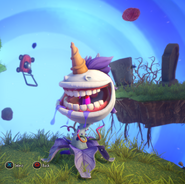