Conjure three Event cards. Then the Plant player Conjures an Event card.
"For the 4th day of Feastivus, my true love gave to me: 1 Fire Rooster, 1 Sneezing Zombie, 1 Bad Moon Rising, and a partridge in a Pear Tree!"
Unexpected Gifts are an event zombie trick card in Plants vs. Zombies Heroes and a member of the

They were introduced in update 1.18.13, along with Transfiguration, Go-Nuts, Witch Hazel, Haunted Pumpking, Ketchup Mechanic, Fraidy Cat, Sneezing Zombie, Exploding Fruitcake, and Frankentuar. They are now craftable as of update 1.24.6.

Their description is a reference to the lyrics of "The Twelve Days of Christmas," an English Christmas carol first published in 1780. It also mentions Fire Rooster, Sneezing Zombie, and Bad Moon Rising, all of which are event cards and thus can be obtained from it.

"For the 4th day of Feastivus, my true love gave to me: 1 Fire Rooster, 1 Sneezing Zombie, 1 Bad Moon Rising, and a partridge in a Pear Tree!"

This trick can be used as an alternative to card draw for the Crazy class. They can Conjure you three event cards for 3

, which acts similarly to Pot of Gold, except that the plant hero also Conjures an event card and is a normal card instead of a token. This can be very useful with Z-Mech and Electric Boogaloo as both of their respective classes lack effective card draw.

When you use this trick, you will Conjure 3 event cards that can range from weaker cards such as Imposter to powerful cards like Defensive End. With Impfinity, you can use this trick with Dr. Spacetime to lower the cost of all three event cards you Conjure.

You can also use this with zombies with the Dino-Roar ability to activate their abilities three times at once, or with Quickdraw Con Man to do one unblockable damage to the opposing hero.

Here is a list of cards Unexpected Gifts can Conjure:

There is nothing you can do with this trick, but at least you will Conjure a free event card. But mainly, the zombie hero will be loaded with event cards, so watch out for certain powerful event cards like Bad Moon Rising and Kitchen Sink Zombie as they may be played.

If you want the zombie hero to not play this card, playing Forget-Me-Nuts and Dark Matter Dragonfruit can prevent them from being played early. As an alternative, Black-Eyed Pea and Sportacus discourage your opponent from using it. Playing Dino-Roar plants or Captain Cucumber can allow you to gain extra benefits from this zombie trick, forcing the zombie hero to think twice before even playing Unexpected Gifts.

For easy reference, here is a list of cards Unexpected Gifts can Conjure: 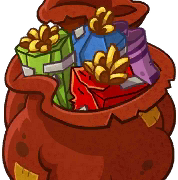 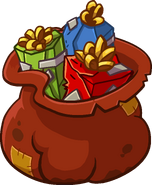 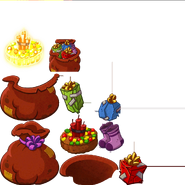 Unexpected Gift's sprites, along with some sprites of Exploding Fruitcake's

Unexpected Gifts being the featured card in the menu for the November 28th, 2017 Daily Challenge

A notification about Unexpected Gifts 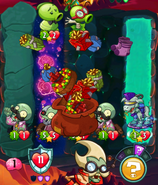 Being played (based on when it was Unwanted Gifts) (animated)