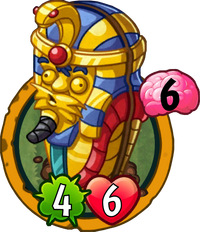 Not to be confused with Pharaoh Zombie from Plants vs. Zombies 2.

Your Hero's Health can't go below 1.
If the Plants think they're going to beat the Undying Pharaoh, they're in de-Nile.
Undying Pharaoh is a premium legendary zombie card in Plants vs. Zombies Heroes and a member of the

. It does not have any traits, and its ability prevents the zombie hero from being defeated while it is on the field. Any damage done to the zombie hero when their health is at 1 does not hurt them or charge their Super-Block Meter. This ability persists until all Undying Pharaohs are removed from the field.

It is based on the zombie in Plants vs. Zombies 2 with a similar appearance.

The word "de-Nile" in its description is a pun on the word "denial," and the Nile river, a river found in Egypt, which is the longest river in the world. In Ancient Egypt, the Nile River was considered to be very important.

If the Plants think they're going to beat the Undying Pharaoh, they're in de-Nile.

Undying Pharaoh doesn't have the greatest stats (although 6 health is still a lot), but it isn't exactly used as a fighter. Instead, Undying Pharaoh serves as an insurance card just in case anything unexpected happens, and a clutch card for when your opponent's plants are threatening to defeat you, buying you a few turns to regain control. But a thing to note is that Undying Pharaoh itself does not help you regain control much due to its below-average stats, meaning that you will need to shore up your defenses with other zombies; if your opponent has gained complete control over you, there is little Undying Pharaoh can do. At the very least, you can heal via cards like Medic, Heroic Health, and Nibble without taking any unnecessary damage.

Surprising your opponent by playing this on low health would be your best time to play Undying Pharaoh, because if you play Undying Pharaoh earlier (presumably when you have enough health to feel comfortable), it will draw aggravation and get destroyed early, unable to save you when you really need it. As for placement, play it on the rightmost lane (lane 4, unless the 5th lane is not an aquatic lane or if Killer Whale is used) so that it can nullify as many attacks as possible.

As mentioned above, Undying Pharaoh will be your opponent's number 1 target due to its ability, so keeping it alive is important. There are two ways to do it, either by supporting Undying Pharaoh, or messing with the opposition.

For the former, the first option is to boost Undying Pharaoh with tricks such as Vitamin Z or Camel Crossing. Z-Mech and Rustbolt have Rock Wall, a cheap trick that tremendously boosts Undying Pharaoh's survivability. The Smash and Neptuna can use Possessed on Undying Pharaoh to give it a small health boost and the

Frenzy trait, but Camel Crossing is better if you don't need the

Frenzy trait. You should beware of opponents with instant-kills in this case, as they destroy Undying Pharaoh regardless of stats (technically, Doom-Shroom and Shamrocket have limits, but there is no reason to let your opponent lower Undying Pharaoh's strength). Another option is to sneak Undying Pharaoh in after the Plants Play phase to protect it from things like instant-kill cards. This can be done by hiding it in a gravestone as Neptuna, or teleporting it in as Rustbolt. However,

Kabloom heroes can take this opportunity and use bonus attacks or damaging tricks to take the win. The former is also susceptible to anti-gravestone cards like Grave Buster. And finally, you can shield it with cards like Escape through Time or Zombot Battlecruiser 5000, preventing you from losing for the entire turn. But just like the first option, this strategy is also weak to instant-kills.

As for the latter, instant-kills are your best bet against plants; Rocket Science and Locust Swarm should easily take care of major threats, while Rolling Stone and Weed Spray can help with weaker plants. However, you don't necessarily have to destroy them, and you can prevent plants from attacking Undying Pharaoh with moving cards, or stall them with

Freezing, both of which are generally cheaper. Bonus Track Buckethead and Defensive End also help, shutting down (or making it harder to use) bonus attacks and tricks respectively. And finally, Parasol Zombie makes it completely invulnerable to tricks, forcing your opponent to deal with it using plants and environments, causing trouble for them if they rely on tricks to remove tough zombies.

Undying Pharaoh is a major nuisance the moment it gets on the field, and your goal will be to remove it as fast as you can, because your opponent will be invulnerable unless this is removed.

The best option would be to play instant-kill cards like Toadstool, Squash, Shamrocket, and Doom-Shroom, although if you are to use Doom-Shroom, it will also destroy your plants with 4

or more. If you don't have them or if your opponent gives this the

Untrickable trait, you should overwhelm Undying Pharaoh with sheer damage, whether it be from plants or tricks (the latter only works if Undying Pharaoh doesn't have the

Untrickable trait). This strategy is easier to execute as a Mega-Grow or Kabloom hero due to their access to such cards. Gardening Gloves can also help if said plant is already on the field, as your opponent can play Undying Pharaoh somewhere else. Bouncing cards like Spring Bean and Jumping Bean can't destroy Undying Pharaoh, so they should only be considered as secondary options.