Grow your pile of Zombies to outer space.

Undead Space is an achievement that can be obtained on the iOS and Android versions of Plants vs. Zombies. In order to earn it, the player must kill 10,000 zombies or more and then scroll to the edge of space on the Leaderboards screen. The player can keep track of their kill count by going to the Leaderboards.

The name "Undead Space" is a play on another Electronic Arts video game, Dead Space.

To earn the achievement, kill at least 10,000 zombies in any way. Your pile on the Leaderboards page accumulates as you kill the zombies. Once you kill 10,000 zombies or more, the pile grows up to the edge of space.

To check their pile, you must tap on the leaderboard icon on the main menu and scroll up on the pile or tap the top of the screen. You do not have to be signed into Game Center to see your score. Try playing those levels over again. You might have killed less zombies than you would have thought at first.

Note: Zombies that are killed in I, Zombie levels will not improve your zombie total.

The base of a pile, with the records for the game modes

One more zombie to get the achievement

The moon from Peggle Nights

The player getting Undead Space 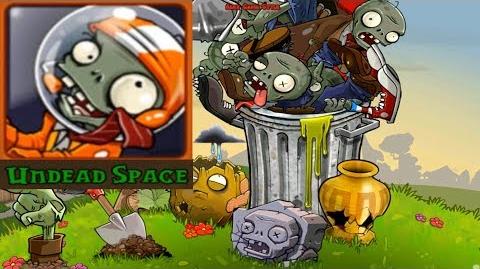