For the version in Plants vs. Zombies, see Umbrella Leaf. 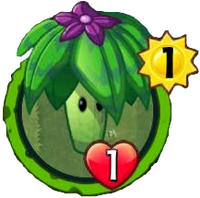 Other Plants here and next door are

Untrickable.
She's not very frond of getting wet.
Umbrella Leaf is a colossal uncommon plant card in Plants vs. Zombies Heroes and a member of the

. She has the Team-Up trait, and her ability gives all plants on her lane and the lanes adjacent to her, excluding her, the

Untrickable trait. This ability persists until all Umbrella Leaves around the plant are removed from the field. Her closest zombie counterpart is Parasol Zombie.

Her description is a play on the words "fond," meaning to enjoy something; and "frond," meaning a leafy part of a plant. It is also ironic, considering the fact that she is based on an umbrella.

She's not very frond of getting wet.

This is a card with incredible potential, being able to protect powerful plants that draw attention and are vulnerable to tricks, such as Doubled Mint, Pecanolith, Astro-Shroom, Soul Patch, etc. But because of her low health, you might want to boost her health or protect her with other plants.

To get the most out of her ability, play her on either the second, third, or fourth lane. To take this even further, try to play two Umbrella Leaves in those lanes that are adjacent to each other and behind other plants. The Umbrella Leaves will make each other

Untrickable, making it very difficult for your opponent to deal with them. Playing three of them can make all plants

Because of her flower tribe, she can be used in a flower deck with Briar Rose and Power Flower. However, only Chompzilla can do this normally.

It is worth noting that the

Untrickabletrait will not protect your plants from plant tricks that negatively affect plants, namely Doom-Shroom and Tactical Cuke.

Be wary when playing tricks that affect multiple plants like The Chickening and Zombot Stomp, as any plants that are made

Untrickable will be excluded from their ability. Tricks that target specific plants will not be able to be played on any plants protected by Umbrella Leaf, so you will need to either remove them with zombies or environments, or get rid of Umbrella Leaf first.

Remember that she herself is not

Untrickable, and because of her low health, simple tricks like Bungee Plumber and Nibble can take her out easily. Other tricks can be used if she has been boosted, such as Alien Ooze and Rocket Science. If there are two of them overlapping, you cannot take them out with tricks, but you can use zombies like Fireworks Zombie and Barrel of Deadbeards to destroy both of them easily.

Retrieved from "https://plantsvszombies.fandom.com/wiki/Umbrella_Leaf_(PvZH)?oldid=2355183"
Community content is available under CC-BY-SA unless otherwise noted.