For the version in Plants vs. Zombies Heroes, see Umbrella Leaf (PvZH).

Umbrella Leaves protect nearby plants from bungees and catapults.

After beating Level 5-6
"SPROING!" says Umbrella Leaf. "Didja like that? I can do it again. SPROING! Woo! That's me popping up to protect stuff around me. Yeah. Just like that. EXACTLY like that. Believe it."

Use these only on levels where Bungee Zombies and Catapult Zombies appear and place them around your most important plants. Each Umbrella Leaf covers a 3x3 square area centered on the Umbrella Leaf.

Plant Sunflowers in the back and on the next column put Umbrella Leaves on the second and fifth squares. Do the same for every third column after that, except every other time put them in the first and fourth squares instead to even out offensive plants. This strategy leaves the most room at the start of the level for offensive plants while leaving ample sun and is therefore best for setups that involve Kernel-pults or Cabbage-pults as starter offensive plants, and later progress onto Melon-pult. Another strategy is to plant Sunflowers in the back on columns one and two from the back in rows one, three, and five, place an Umbrella Leaf on column two, rows two and four. Place offensive plants in column one, rows two and four, and column three and four all the way down. Place an Umbrella Leaf in column five, rows two and four, and fill the rest of the spaces with offensive plants. Plant Tall-nuts all the way down the next column. This will allow for six Sunflowers and three offensive plants per row, which is plenty. Another column of offensive plants can be used instead of Tall-nuts if you wish to have four offensive plants per row, and place the Tall-nuts immediately afterwards. This can be risky as the Bungee Zombies can steal your Tall-nuts and the Tall-nuts will take loads of damage and may be liable to be taken out by Gargantuars easily. This setup is optimal for providing relatively large amounts of sun while leaving ample space for offensive plants and is thus the best one if Potato Mines are used as stallers while saving up to go straight to Melon-pults. This setup has more sun at the beginning relative to the other setup, and will have the same total space at the end of the setup.

Because Bungee Zombies and Catapult Zombies will appear on Survival levels, the player should plant Umbrella Leaves before they make an appearance as Bungee Zombies will not be bounced away if the player plants the Umbrella Leaf late. Plant them in the second-to-last column (second one counting from your house) in the second row from the top and bottom. You can use Gloom-shrooms to cover the plants that are not covered by the Umbrella Leaves if only Bungee Zombies are threats, or plant more Umbrella Leaves where necessary; in order to maximize efficiency, plant them only in the second row from the top and bottom, and move your Sunflowers around to compensate for lost space in the rows. If you have Digger Zombies, you may want to use a second Gloom-shroom instead, while placing Umbrella Leaves in the back for Catapults. This is ideal if you have a strong defense that is enough to destroy Bungee Zombies, or if you are playing Survival: Endless. However, they are strongly recommended in the latter.

This plant can be difficult to dispose of, especially since it can not be taken out by Bungee Zombie. In addition, the plants around it will be safe too. Digger Zombie should be used here, as it can eat the plants from behind, making it easy to get rid of Umbrella Leaf. However, if there are Split Peas, Starfruits, or Magnet-shrooms, the player should consider taking those out with other zombies, and then using Digger Zombie.

Umbrella Leaf in the DS version of Plants vs. Zombies

An Umbrella Leaf in Zen Garden 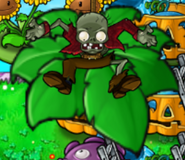 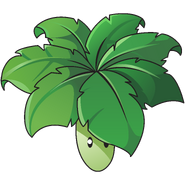 Umbrella Leaf seed packet in the iOS and Android versions 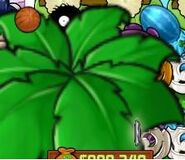 An Umbrella Leaf is deflecting a basketball

Another Umbrella Leaf against a basketball

An Imitater Umbrella Leaf in a Flower Pot

Umbrella Leaf in an Imitater Pumpkin

Umbrella Leaf in a Pumpkin

Imitater Umbrella Leaf in a Pumpkin

Retrieved from "https://plantsvszombies.fandom.com/wiki/Umbrella_Leaf?oldid=2344518"
Community content is available under CC-BY-SA unless otherwise noted.