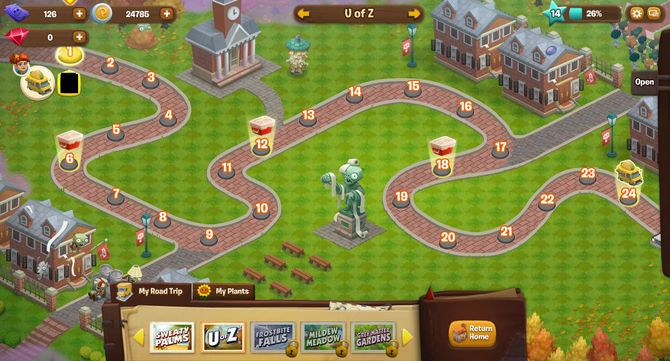 Reclaim The Fire Station Lot and travel with 4 friends.
U of Z was the seventh map stage in Plants vs. Zombies Adventures. It introduced the Football Zombie to the player. The player had to complete Level 24 in order to obtain the Broken Taco Truck, which was used to reclaim The Flaming Lot.

Because this is a university which has zombies, the name U of Z is most likely an abbreviation of "University of Zombies."

It appeared to be a university. There was a statue of a zombie that seems like the Statue of Liberty, covered partially in toilet paper. There were a few zombies lying down near barrels. In the top right corner of the map was a football field being spectated by a group of people.

U of Z map stamp