When played next to a Leafy Plant: Draw a card.
"Everyone's magic in their own special way. Everyone except me."

Typical Beanstalk is a triassic uncommon plant card in Plants vs. Zombies Heroes, and a member of the

. It does not have any traits, and its ability draws a card when it is played on a lane adjacent to a leafy plant, but not when a leafy plant with the Team-Up trait is on its lane.

It is based on the plant in Plants vs. Zombies Heroes with a similar appearance.

Its name is a combination of "typical," referencing how it is not magical, unlike Magic Beanstalk, and "beanstalk," the real-life plant part it is based on.

"Everyone's magic in their own special way. Everyone except me."

Typical Beanstalk is a card that is highly outclassed by other cards. Its stats are below average for its cost, and it's ability tends to be situational, especially for a 5-cost card. The card draw can be used to activate Dino-Roar abilities, but there are other cards that can do this better, such as Flourish and Bamboozle. Typical Beanstalk's rather underwhelming ability only triggers next to leafy plants, whereas the aforementioned cards do not have such a restriction. Other 5-cost plants such as Whipvine have a much better stats-to-cost ratio and a more practical ability. While Typical Beanstalk can synergize with the leafy and bean tribes, it would usually be more preferable to use other leafy and bean plants.

Typical Beanstalk's raw stats are sufficient enough to bring a few zombies down, so you should play cards like Rocket Science if one shows up on the field. As for its ability, try to destroy any leafy plants on the field, because it gives the plant hero a card, allowing Dino-Roar cards to cause more trouble. Other than that, this shouldn't be too hard to bring down.

Typical Beanstalk's statistics after being Conjured by Mayflower

Typical Beanstalk's statistics after being Conjured by Cosmic Bean

A card image for Typical Beanstalk 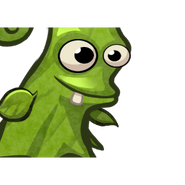 Another card image
Add a photo to this gallery

Retrieved from "https://plantsvszombies.fandom.com/wiki/Typical_Beanstalk?oldid=1957499"
Community content is available under CC-BY-SA unless otherwise noted.