Twilight Chomper is a Special variant of Chomper in Plants vs. Zombies: Garden Warfare 2. He was first revealed in the patch notes for the upcoming Soil Survivor DLC. There are currently three known ways to unlock the Twilight Chomper when it is released. If the player already has unlocked the Unicorn Chomper, they will receive the Twilight Chomper as a gift if they log in by February 28, 2019. They can also unlock him by paying real money to get the "Midnight Snack Upgrade", which will be available for purchase starting February 21, 2019. The third and final way of obtaining this character is by reaching 400 player vanquishes (and the community reaching 6 million vanquishes) in the Community Challenge lasting February 14-20, 2019.

It has been described as "the dark-magic prince of plants" and "an enigmatic counterpart to the infamous Unicorn Chomper" by the game's official website. Its gimmick is called the Twilight Warp, which is similar to the Unicorn Chomper's Rainbow Warp (an alternate ability for Burrow), but with only one charge and it travels a greater distance. He also has less health, stronger chomps, and can chomp less often than other biting chompers. 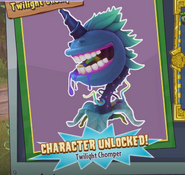 Twilight Chomper in the mailbox

Twilight Chomper about to use Twilight Warp

Retrieved from "https://plantsvszombies.fandom.com/wiki/Twilight_Chomper?oldid=2115024"
Community content is available under CC-BY-SA unless otherwise noted.