For the Plants vs. Zombies 2 version, see Turquoise Skull Zombie.

.
The mystical Turquoise Skull stole the sun itself, lighting the way to the Mustache Monuments.
Turquoise Skull Zombie is a triassic super-rare zombie card in Plants vs. Zombies Heroes and a member of the

He has the Gravestone trait, and his ability takes away 1

from the plant hero and gives him +1

at the start of every turn, starting from the next turn after he is revealed. The sun-stealing ability stacks with each additional Turquoise Skull Zombie on the field and persists until all are destroyed.

His description is a reference to his ability to steal sun in said game.

The mystical Turquoise Skull stole the sun itself, lighting the way to the Mustache Monuments.

Turquoise Skull Zombie is an average zombie in terms of stats. Fortunately, he can be quite useful thanks to his ability, as not only does your opponent get less sun to use on their turn, Turquoise Skull Zombie strengthens up as well. His Gravestone trait also helps, as it makes him immune to most cards until he is revealed.

Since his ability activates every turn, a good idea would be to increase his health so he stays on the field longer, which should be easy due to the Hearty class having efficient health-boosters like Camel Crossing, Healthy Treat, and the like. At the same time, giving it the

Frenzy trait through cards like Going Viral and Possessed will allow it to make good use of the strength boost he gets every turn.

However, giving him additional strength would be recommended if you want to use him offensively since Turquoise Skull Zombie won't hit very hard for the first few turns due to his low base strength.

Since he is in the professional tribe, he can be used to boost Zombie Middle Manager or Evolve Jurassic Fossilhead, although the latter is not recommended as Turquoise Skull Zombie has a long-term ability.

Or, you can put him in Rustbolt's mustache deck with Mustache Waxer and Duckstache, although, again, Turquoise Skull Zombie is not fit for Evolution. And for the last synergy option, you can make use of his Gravestone trait and give it a small boost with Headstone Carver as Neptuna, or boost Grave Robber as Z-Mech.

But as mentioned before, Turquoise Skull Zombie needs heavy set up to be truly formidable, as both aspects of his ability are rather weak individually, and his low stats don't do any favors either. And in the late game, his ability to take away sun will be near useless since your opponent will have enough sun to play their desired cards anyway, meaning that he will only make a meaningful impact for a few turns before being outclassed. But regardless one can still use him for evolution with certain zombies to make better use of their abilities.

Turquoise Skull Zombie may not be much of a devastating threat, but he is annoying with his high health and the ability to steal sun and increase his own strength. However, there are several cards that can easily neutralize him. Since he has the Gravestone trait, Grave Buster, Blockbuster, and Grave Mistake will remove him before he gets to do anything, although Grave Mistake can only Bounce him, and the other two options are exclusive to Guardian heroes.

If you don't have them, you have no option but to wait until he is revealed, and then play instant-kills like Whack-a-Zombie, Chomper, and Squash (For Solar heroes). Of course, Squash is only a last-resort option.

To counteract his ability, you can play cards that generate extra sun such as Sunflower, although the strength-boosting part of his ability will still remain. If he becomes too powerful, resort to tricks like Shamrocket, Doom-Shroom, Transmogrify, and Goatify. 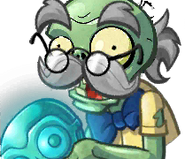 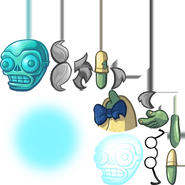 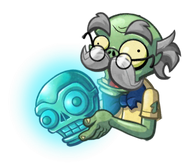 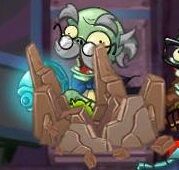 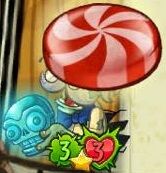 Turquoise Skull Zombie on the field

Turquoise Skull Zombie about to attack