For the version in Plants vs. Zombies Heroes, see Turquoise Skull Zombie.

Uses skull to steal sun, then unleashes energy in a destructive beam.

(can't be burned if ready to bounce)

(can't be burned if hiding)

(automatically recovers from its damage)

(takes 3 beam blasts to be destroyed)

Lost City - Day 27
Unlike the more famous crystal skulls, turquoise skulls are totally non-mysterious and common as dirt.
Turquoise Skull Zombie is a zombie encountered in Lost City. In a similar manner to Ra Zombie, it steals sun, but can also use its turquoise-colored skull to burn the player's plants up to four tiles in front of it. The zombie does not need sun in order to do the latter. If it manages to steal sun from the player, the beam's range will be increased and the sun will not be returned to the player when the zombie dies, unlike Ra Zombie.

It bears a strong resemblance to Archimedes Q. Porter from Tarzan. The skull used by it is an obvious reference to the crystal skull in the Indiana Jones movie Indiana Jones and the Kingdom of the Crystal Skull. This is further proven by its Almanac entry, which references crystal skulls.

Uses skull to steal sun, then unleashes energy in a destructive beam.

Unlike the more famous crystal skulls, turquoise skulls are totally non-mysterious and common as dirt.

The instant kill abilities of Turquoise Skull Zombie can quickly become a problem, especially in Temple of Bloom, when it is accompanied by a group of Buckethead Adventurer Zombies, Excavator Zombies, Parasol Zombies, or worse, Porter Gargantuars.

The main weakness of this zombie is its own ability to steal sun, as it keeps it from being overpowered, as it will always try to steal sun before burning the plants in front of it. Because of this, the player has a decent amount of time before killing it. This can be prolonged if you let the sun travel a bit towards its turquoise skull. If more expensive plants are close to Turquoise Skull Zombie and it has not been killed yet, it is perhaps best to dig the plants up. Turquoise Skull Zombie, however, only uses its attack when plants are in close range; therefore, if the player removes plants from its range or it is far away, it cannot use the attack. Also, unlike zombies such as Gargantuar Prime, Wizard Zombie, and Octo Zombie, their attacks do not stack up and can be effectively stalled, akin to Jester Zombie, Hunter Zombie, and Excavator Zombie. Therefore, you can stall them with hard-shell plants such as Primal Wall-nut.

Guacodile can help stop these zombies, as they begin to rush when Turquoise Skull Zombie shoots them with its laser. Ghost Pepper can also be useful to defeat this zombie and a group of Lost City zombies. Kernel-pult may be useful to stop these zombies, but only when you have two or three columns of them. Spore-shrooms are also useful as the newly created ones can stall this zombie. However, avoid using these strategies when Parasol Zombies are in front of them. Spikeweed or Spikerock could be useful, as its beams cannot destroy those plants. One attack from Magnifying Grass will instantly kill one of them. Cactus and Celery Stalker can also be useful. However, Cactus must be planted near the zombie to avoid being burned by its beam. If these zombies get close, knockback plants like Primal Peashooters can knock it out of range, causing them to waste an attack or incinerate plants that aren't that useful. Intensive Carrot can instantly recover any destroyed plants.

Infi-nut can be useful as a defensive plant against this zombie because, unlike other defensive plants, Infi-nut can recover once shot by the laser of the Turquoise Skull Zombie. It is not recommended to use Infi-nut's Plant Food ability, as its force field can be easily destroyed by this zombie. Even though Explode-O-Nut will still explode as Turquoise Skull Zombie hits it with its beam, it's usually too far away to take damage. On the other hand, you can use them to trigger the explosion early and take out any other nearby zombies. If it's too late to kill this zombie before he fires his laser, the player can recover some sun by shoveling up the more expensive plants.

Note that this zombie can still attack unarmed or even armed Potato Mines and Primal Potato Mines, so don't plant them when he's stealing sun. 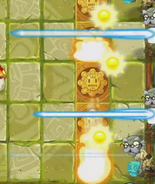 Cactus can hide and be unaffected by Turquoise Skull Zombie's laser

Spikeweed, Spikerock, Celery Stalker, and Spring Bean are all too low to be hit by Turquoise Skull Zombie's laser 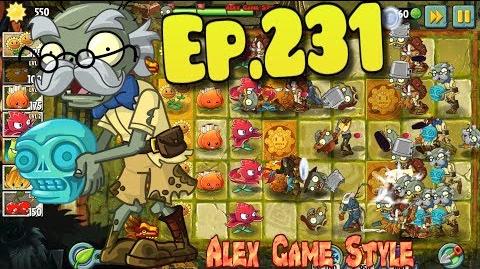