Will You Be My Posse?
Tumbleweed Ted is a character in the game Plants vs. Zombies: Battle for Neighborville who resembles a Peashooter wearing a green "Law Pea" hat. He hates tumbleweeds and can't understand why people call him "Tumbleweed Ted" instead of his real name, "Pierre". He can be found in Mount Steep, specifically in Olde Town, near where the player spawns.

Will You Be My Posse?

Prove Worthy of the Sheet Music by Rustlin' Up a Posse

What's more dangerous than getting between the Big Boy Gang and their pals in jail? Some Sheet Music, apparently. Prove you can handle both by rustlin' up a posse! 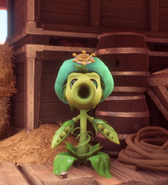